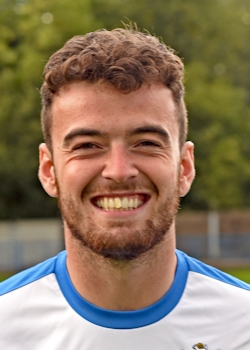 Liam started with Stockport Georgians, before quickly moving up the leagues to join Cheadle Town where he won the Players Player of the year in 2016. After a spell with Mossley, Liam signed with Celtic as cover at the end of 2016/17 season and resigned for the 2017/18 season but was struggling to get games under Steve Burr, opting to sign for Marine. He went onto make 38 appearances for the Mariners and score eight goals. He made his debut for Marine in a Liverpool Cup match, helping Marine to a 4-2 win over City of Liverpool, with his first goal coming in his very next game, which was also a cup match this time against Brighouse Town.
Career
Position
Midfielder
Born
10th Aug 1997 (23 years)
Joined
1st Mar 2017
Left
1st May 2019
Last App
27th Apr 2019
Last Goal
17th Nov 2018
Career
Appearances
49
As Sub
5
Subbed off
4
Unused Sub
8
Goals
5
Assists
4
Red Cards
0
Yellow Cards
4
Points
49 / 147
Average Points
1.00
Wins
13
Draws
10
Losses
26
Total Pitch Time
3939 mins
Appearances
Sponsors
Main club sponsor