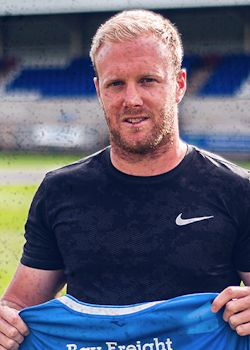 Shane joins the club after a brief spell at Buxton, who he had joined from Alfreton Town last season. Shane began his career at Huddersfield Town before entering non-league with Ossett Albion at just 15 years of age. He re-joined Huddersfield Townâ€™s academy and made his first-team debut in a league game vs Crewe Alexandra in 2007. Shane had loan spells at Hyde, Harrogate Town and Oxford United before making the latter of those moves permanent in 2009. He then spent three years at AFC Telford United making over 130 appearances as club captain, earning promotion to the National League. Next up was a return to former loan club Harrogate Town where Shane made 78 appearances before joining Bradford Park Avenue in 2016 where he featured in 91 games, scoring eight goals.
Home Shirt Sponsor
Sponsor Required
Ring us on 0161 338 2828
Away Shirt Sponsor
Sponsor Required
Ring us on 0161 338 2828
Photographer