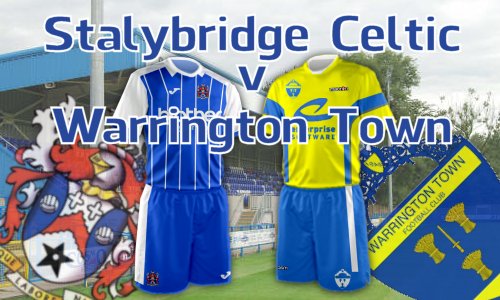 Celtic Win At Home Against Warrington
By Deborah Taylor 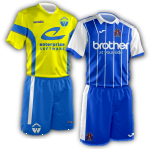 Celtic made it four out of four to beat Warrington Town for the second time, maintaining our hundred percent record against the Yellows thanks to a penalty and a wonder strike.

After an early scare when Tony Gray’s thumping near post header from a corner had to superbly tipped over the bar by Jack Walton, Celtic grew in confidence against the league’s second placed team. Though there were some half chances, including Matty Wolfenden being an inch away from a superb Greg Wilkinson cross, it took another half an hour for Celtic to find the way through one of the league’s best defences, when Connor Hughes came swinging into the box to go one-on-one with Tony McMillan. McMillan tried to take the ball at Hughes’s feet, but the speedy winger had already moved the ball around him, ready for the shot. McMillan swept away Hughes’s feet instead. There was no hesitation and the penalty was awarded.

Liam Dickinson took the spot kick; despite going the right way, had McMillan got a hand to the ball, it would have broken his wrist!

After McMillan had failed to clear a loose ball near the corner flag, the ball came to Dickinson, who aimed for the opposite corner of the goal, but McMillan recovered well and got across his goal face to deny Dickinson his second.

There was nothing McMillan could do when Hughes beat Shaun Beeley and found Wilkinson coming in on the diagonal. Wilkinson met the ball perfectly, hitting it first time with ferocity that flew into the top corner right before the interval.

The second half saw Warrington press and press hard, at times camped around the Celtic box. The Celtic defence were soaking up the pressure trying to hit Warrington on the counter. Moments after a melee in the box saw Jamie McDonald fire inches wide, Celtic broke and Hughes’s curling shot was only inches wide at the other end. Chances for the visitors were slim, Luke Ashworth, Ross Killock, Jack Taylor and Harrison Holgate were the unsung heroes keeping the lively Warrington attack at bay. The whole team had to get back and help out at times, Dickinson and Danny Morton helping provide an impenetrable wall of blue. And when Celtic did counter through Matty Wolfenden and Connor Hughes, Warrington were lucky not to lose by more.

Right at the death, in six minutes of stoppage time, both teams got a chance each. Hughes, one-on-one, took his shot early, the ball curling out just the wrong side of the post, whilst at the other, Liam Goulding shot through a crowded box, but Walton was perfectly placed to make the catch look simple and earn his clean sheet.

Celtic climbed a spot in the table and can climb another two if this astounding change of form continues on Tuesday when play-off chasing Grantham visit Bower Fold.