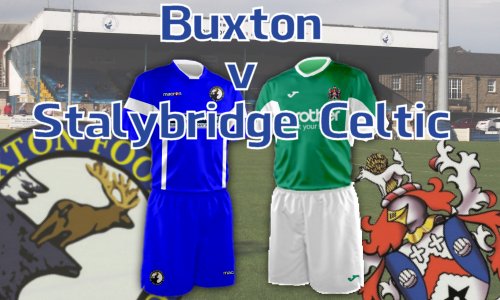 Celtic Draw Away At Buxton
By Debbie Taylor 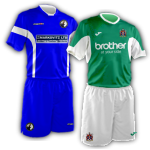 The search for an away win continues after a hard battled performance against a Buxton side that pulled back a two goal deficit at the interval to take a share of the points.

Celtic had the better of the first half by a country mile, and Theo Bailey-Jones was an inch wide after he met an inch perfect pass from Liam Dickinson, but poked it the wrong side of the post with Will Jasskelainen beaten. Buxton, too, had a good chance a few minutes later when they broke and Brad Grayson's lob over returning Celtic keeper, Jack Walton, hit the bar and was cleared by Luke Ashworth.

Deservedly, Celtic took the lead. Connor Hughes deep cross was right into the danger area, Liam Dickinson bending his body around Jack Broadhead to flick the header just beyond the fingertips of Jasskelainen.

Celtic went on to produce more fluid football, attacking at pace and given the barebones Buxton squad no relent. Jordan Chapell fired over the bar after good build up play, and Bailey-Jones was on target but lacked the power to beat Jasskelainen, diving down to his right. Ten minutes before the interval, Liam Dickinson turned provider, putting the ball low into the mix where it momentarily got caught in Connor Hughes's legs. Chapell extricated and placed the ball perfectly into the bottom corner.

There was just time in the half for Hughes to have a go himself, but again Jasskeainen went untested.

The second half was much more even, with Buxton upping the pressure themselves. After waisting a couple of good chances by firing well over the goal and stand, escaped going a third down that would have killed them off with a combination of excellent goalkeeping and bodies on the line. The initial save from Chapell was a flying one handed reaction save, the ball coming to Hughes who lashed it towards the bottom corner where Kern Miller slid in to block, the ball coming out to Liam Dickinson who was likewise thwarted by Miller on the line.

To compound the lack of goal, Buxton raced down the other end and it was Ashworth that had to intervene, at the expense of a corner. Jack Broadhead's head amidst a melee of heads got the telling touch at the far post squeezing the ball between post and Walton's hands.

There was a purple patch for the home team for the next ten minutes in which they pressed harder than they had all match, but apart from a woeful header from Liam Hardy off a corner, it looked like Celtic would weather the storm, until a free kick saw Josh Meade scamper down the line, cut inside and loft the ball to Ryan McDermott who turned the ball in under Walton.

The last fifteen minutes was all Celtic as the visitors sought to regain the lead the home team had wrestled away. A nasty two footed lunge from Broadhead on substitute Tom Brown saw a scuffle that probably saved the Buxton defender from a dismissal, and instead be shown a yellow alongside Liam Dickinson. The eventual free kick was lifted narrowly over the bar by Oliver Roberts. Connor Hughes came closest to regaining the lead when he and Jordan Chapell interchanged at the edge of the box and he curled a cracking shot that Jasskelainen not only stopped but held onto as Liam Dickinson arrived for the spillage.

There was one last chance for Celtic when late substitute Jake Charles was sent racing towards goal by Alex Honeyball's intelligent pass. Inches from the box Brad Grayson risked a dismissal and Charles's career with a sliding tackle through the back of Charles that sent him flying ? earning just a booking. Dickinson stepped up to take the free kick, curling up and round the wall, over Jaskelainen and just over the bar onto the top of the goal.

This was one of those games where Celtic deserved to win, but whereas in the past we would have lost, this time, at least we got a point.