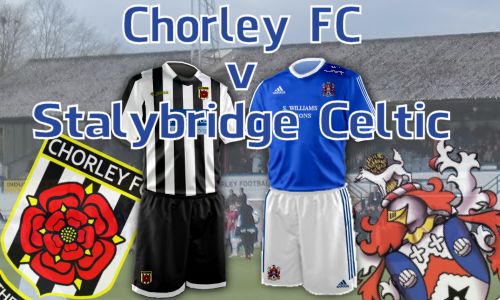 Two For Sorrow
By Iain Benson 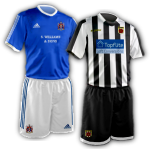 Celtic could not turn domination into goals in the first half, with the Magpies scoring with their only on target shot in the half to give them an advantage they built on in the second half earning the points.

Celtic started at a hundred miles an hour, Sam Ashton called into action almost from the off, with a great low save from a Charlie Ennis volley. Despite the pressure, Chorley broke and a simple cross in from the right wing was nodded unchallenged by former Celtic striker James Dean towards the back post, just beyond Lewis King's finger tips and in off the inside of the post.

Celtic continued in the same vein, and a penalty really should have been awarded when Andy Teague sliced through Ennis's standing foot inside the box as he was readying to pull the trigger, but one wasn't given, and Celtic had to press on. A superb dipping twenty-five yard effort saw Ashton's athletic side pushing the ball over the bar, and when Ashton was finally beaten by a well worked move that finished with Dickinson bursting between Teague and Tom Smyth to latch onto Ben McKenna's well weighted diagonal ball into the box, before slipping the ball past Ashton, he was pulled back for offside, in what was patently an incorrect decision.

So Chorley started the second half a goal to the good and not a goal down. George Lomax came on for a bruised and battered Aidan Chippendale, and immediately got a great chance to equalise, although Ashton got down well and kept hold of the ball. Ennis could have equalised too moments later, and Ashton has to take the credit that he didn't, firstly with an athletic stop to push Ennis's low drive round the post, and then off the corner instinctively blocking Ennis's driven shot, and happily watching the rebounded ball headed narrowly wide across the face by Ennis.

It took to the hour mark for Chorley to have a second shot on target, Harry Winter's drive well collected and held by King with Dean baring down for any spills, and Chorley started to get into the game to finish the stronger of the two teams. Jake Cotterill's drive across the face was only just wide and fullback Kyle Jacobs's effort smashed back off the woodwork. It wasn't totally Chorley's way in the final twenty minutes, with Ben McKenna perhaps guilty of taking one too many touches to control George Lomax's fantastic ball, but still forcing Ashton into a good stop.

The killer blow came just before the end, Celtic undone by a simple ball nodded over the top into the path of Chris Almond who controlled well and placed the ball beyond King's reach and leave Celtic without any hope of getting back into the game. Both Harry Winter and Darren Stephenson were guilty of failing to embarrass Celtic with a third, the former firing wide, and King able to get across to stop the latter's effort.

Early table positions don't count for much, but it feels better to say that from the top third instead of the bottom third.