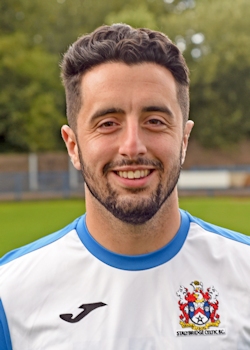 John joins from Telford United, a team he first joined on loan from Stockport County in 2017, impressing in his five appearances on loan by scoring twice that Telford made the loan permanent. He went onto make twelve more appearances and score two more goals for Telford. He started his career in Wrexham, coming through the youth academy there. In 2004, he switched to Wigan Athletic, spending four years at their academy before his release aged 16. He was offered a place at the other Celtic, Glasgow Celtic, and after two years was offered a professional contract for the Scottish giants. He spent the 2010/11 season on loan at Hamiliton Academical, where he broke his foot. At the end of his loan, he was released by Celtic and returned to England to play for Rochdale reserves. Despite scoring eight goals in fourteen games a first team contract was unforthcoming and in 2011 he signed for Aberystwyth Town. With first team football still infrequent, making two appearances for the Welsh team, he moved into Non-league with Woodley Sports (as they were then) in 2012, going onto scorer 21 goals in 31 appearances. This kind of form attracted league clubs again, earning him a first team contract with Stoke City in 2013, finishing the 2012/13 season there. When his contract was not extended, he joined Shrewsbury Town, making just three appearances in the 2013/14 season thanks to another broken foot. A return to non-league followed in 2014, where he joined Southport, going onto make 31 appearances and scoring 5, despite going on loan at Lincoln City where he appeared 6 times. He finished the season 14/15 season with brief stays at Macclesfield Town and Colwyn Bay. In 2016, he joined Stockport County going onto make 40 appearances and score nine.
Career
Position
Striker
Born
9th Dec 1992 (28 years)
Joined
28th Jun 2018
Left
10th Sep 2018
Last App
4th Sep 2018
Last Goal
Never Scored
Career
Appearances
6
As Sub
3
Subbed off
1
Goals
0
Assists
1
Red Cards
0
Yellow Cards
0
Points
8 / 18
Average Points
1.33
Wins
2
Draws
2
Losses
2
Total Pitch Time
312 mins
Appearances
Sponsors
Main club sponsor