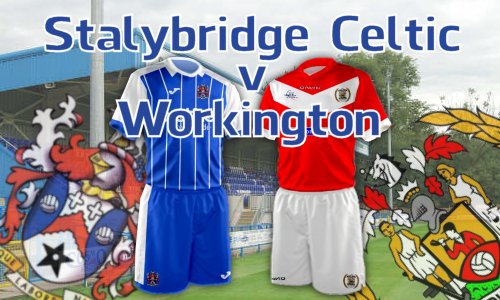 Celtic Lose At Home To Workington
By Deborah Taylor 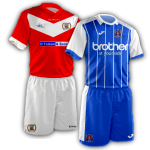 In an unimportant match in atrocious conditions in front of Celtic's lowest crowd with both teams fielding teenagers after playing eleven games in three weeks, Celtic ran out of steam Workington the three points, in somewhat contentious circumstances.

The game started evenly, Braulio Maieco forcing Aaran Taylor into a good early stop after good build up play saw Matty Wolfenden set him up for a low shot. Liam Dickinson headed over from close range off a corner and Maieco got into a good position to fire narrowly wide from an angle. Jake Charles was again a thorn in the opposition defence, with Taylor producing two top drawer saves to deny him, the first one-on-one, the second a curling shot that Taylor somehow reached. A cracking cross from Brice Pouamoun found Matty Wolfenden arriving, but his header was over the bar.

It was somewhat against the run of play when Max Brown was given the time and space to pull the ball back for the completely unmarked Scott Allison at the corner of the box and his shot was powerful with bend that left George Sykes-Kenworthy no chance.

The goal gave Workington impetus to push on, with Allison forcing a flying save from Sykes-Kenworthy the ball falling to Sheldon Mossop but Sykes-Kenworthy got back to his feet to block the second shot for a corner that Celtic couldn't clear and came to Gari Rowntree, but again Sykes-Kenworthy was well positioned to make the stop. Celtic came back into the game at the end of the half, but Charles and Wolfenden didn't overly trouble Taylor.

The second half saw Celtic start well, Charles's powerful drive pushed at full stretch around the post by Taylor, but it all went sadly wrong when Steven Rigg latched onto Matty Douglas's lofted ball down the middle. There was a definite handball from Rigg to knock the ball just ahead of Liam Dickinson and Luke Ashworth for him to run onto and as Sykes-Kenworthy came out to take the ball at his feet, he delicately lobbed the ball over Sykes-Kenworthy to double Workington's advantage.

Connor Hughes twisted the visitor's defence into knots to make the space for a fantastic curling shot that had Taylor watching and praying. His prayers were answered as the ball struck the post and came back into his grateful arms. Moments later, Celtic's goal came. Charles held off the defence to allow support to arrive, and Hughes duly did, dragging the Workington defence apart for him to lift the ball to the edge of the box where Oli Roberts swept in to smash the ball into the top corner.

Hughes could have equalised moments later, but dragged his shot wide and again, it was somewhat against the run of play that saw Workington put the game to bed with a superb through ball from Max Brown for Sheldon Mossop to run onto. One-on-one with Sykes-Kenworthy he didn't try and get close but curled a shot with the outside of his boot into the top corner.

Celtic were denied a deserved goal by an incorrect offside decision when Pouamoun pulled a curling cross back from the touchline. Charles outjumped his markers to plant a header into the top corner, only for the assistant to raise his flag. That was enough for Celtic. After conceding a goal to handball and having a perfectly good goal ruled off, they couldn't muster the energy to mount another meaningful attack. After Allison had struck the crossbar with a few minutes left on the clock, Hughes and Elisene Fernandes both fired wide at the other end, with Hughes unlucky not to grab a second deep into stoppage time when his wicked shot struck Cam Harker's leg to go for a corner there was no time to take.

There are still two games left in the final three days of the season, Celtic must somehow dig out the energy to play Thursday and Saturday.