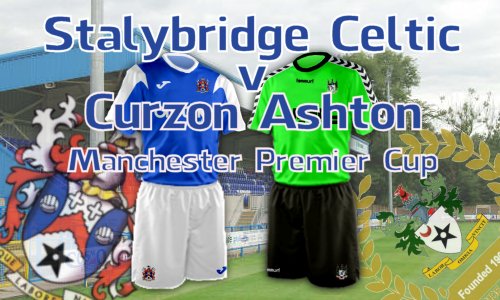 Celtic Win At Home Against Curzon Ashton
By Debbie Taylor 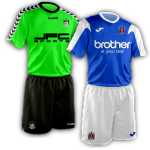 Celtic progressed to the semi-final of the Manchester Premier Cup to face Salford at Bower Fold by overcoming a committed Curzon side despite going down to ten men.

The first half was quite cagey on a slippery pitch, with chances at a premium. Danny Wilkins had the opening effort on target, but right down Burton Hakan’s throat for a straightforward catch, whilst Adam Morning and Paul Ennis both did the same at either end. Keiran Dunbar had a great chance after a superb through ball from Gary Gee set him one-on-one with Hakan, but on the slick surface he slipped, and the chance was gone.

The second half was a bit livelier. Keil O’Brien got his head on a Curzon free kick, just ahead of Andy Watson, requiring a great save from Phillips to keep it out, but the best chances were falling to Celtic, and it required a cracking double save by Hakan from Adam Mourning who got his head on a Wilkins cross, the rebound coming back at him, Hakan reached up a hand to push the second header away.

It was that pair that linked up again to score the game’s only goal, Wilkins putting the ball into the path of Morning, Hakan pushed him wide, but Morning had the edge on reaching the ball, firing from an acute angle. Hakan got a good fist on the ball, but couldn’t keep it out.

Morning, already booked for a supposed simulation, received a second yellow when he delayed the restart, leaving Celtic a man down for the last fifteen minutes.

Despite this, the better chances were still falling for Celtic. Danny Wilkins twice got into great positions, but both times was denied by the Curzon keeper. The first was a great run into acres of space, and the second saw Aaron Chalmers cap off an excellent game by getting one-on-one with Hakan, but choosing to square to the better placed Wilkins, but defenders got back and delayed Wilkins long enough for Hakan to get across and make the save.

With only one goal difference, the last few minutes were nervy, but Celtic’s defence held onto the clean sheet and go through to the semi-final.