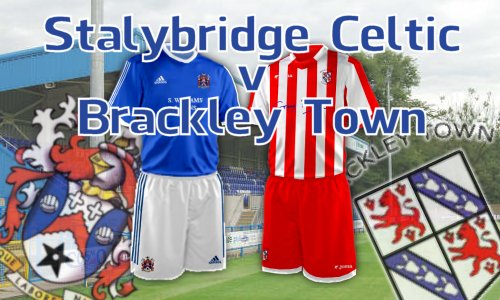 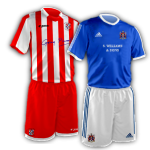 If any positives are to be taken from this game, it would be the second half. The first half was possibly the worst first half of football ever witnessed at Bower Fold, from a Celtic perspective.

With Lewis King at hospital with his wife (she gave birth during the match apparently), it was up to Olly Martin to make his debut. It wasn't to be the dream debut he could have hoped for, when in the opening couple of minutes, Ryan Rowe's shot was heading straight for him, until Stefan Galinski put his leg on it and diverted it away from Martin, putting the shot in the top corner beyond his reach.

Celtic went looking for an equaliser, and under pressure from Ben McKenna, Dwayne Samuels forced powerfully at his own net, forcing Billy Turley into his best save of the match. As it was, it was Brackley that found the net next, Greg Kaziboni latching onto Ryan Rowe's across the face cross, with Kaziboni unmarked, he could pick his spot, and was never going to miss. Soon it was three as Celtic were looking over run, devoid of energy or ideas, and now also missing Stefan Galinski who suffered a recurrence of his injury. A half cleared ball fell to Sam Whittall and he fired straight back in with a curling twenty-five yarder that was a very good finish.

A suicidal back pass from Oliver Crowley put Martin in a world of trouble with both Ryan Rowe and David Moyo descending on the ball, it was more a question of which Brackley player would get there first, as it was, it was Rowe, and with Martin now well out of position, it was a rolled home ball for Rowe's second, and Brackley's fourth.

Just before half time, Celtic's inability to defend set-pieces reared its ugly head again, as Stuart Peirpoint came in unmarked onto Dwayne Samuel's free kick, for the simplest of goals.

With Celtic looking on the ropes, the second half seemed more a question of how many Brackley wanted to score. This looked even more likely when early on Ryan Rowe was through one-on-one with Martin, Martin went in for the ball, it was knocked past him and Martin clipped Rowe. It was a dismissal for Martin and Crowley took the goalkeeper's jersey, ready to face Rowe who was looking for his hat-trick. Rowe kicked to the right, far bottom corner, but Oliver Crowley pulled off the most important save of the match, and Celtic defended the loose ball well.

That save seemed to give Celtic a boost of confidence that had been sorely missing in the first half. With an unorthodox back line of Wigley, Hughes, Heath and Regan, Celtic actually looked solid at the back. Maybe Brackley weren't trying too hard, but with an outfield player in goal, it was an opportunity to run riot, but every attack was repelled, leaving Crowley very little to do for the rest of the match.

With the back now shored up, Celtic started getting forward, and looked good doing so. Matty Hughes put a corner well over, and Paul Ennis blazed over the bar after some great build up play that moved the ball around Brackley. Brackley were holding a high line, and when Scott Kerr realised, and put a ball over the top, off went Jamie Allen, easily outpacing Stuart Pierpoint, gathering himself as he reached Billy Turley and slotting it into the far corner, with Turley unable to do anything.

Sadly, that appeared to be the limit of ambition for Celtic in this match, and they settled for playing possession football, waiting for an opening that never came. They played well, and had the first half been similar, Celtic would have won, but with such an abysmal first half performance, a man down, there was never going to be anyway back. There would be no Valentine's Day happy ending.