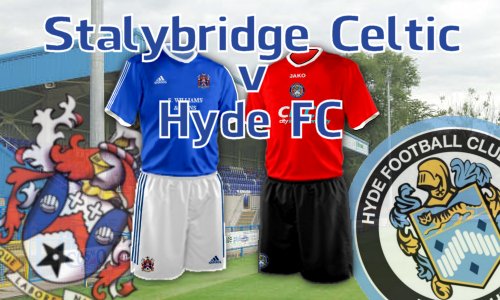 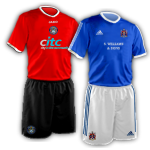 The fireworks coming from the hill were matched by the fireworks on the pitch as Celtic continued where they left off on Boxing Day and demolished Hyde in a resounding win.

But it didn't start hopeful, with Hyde looking as bright and breezy as the weather was grim and windy. In their first attack, Luke Giverin was allowed time and space down the left to pick out his cross over what little Celtic defence that had got back to the unmarked Tom Bentham at the back post to nod home with the simplest of goals.

It was nearly doubled moments later when Chris Almond danced inside and fired off a low effort that Lewis King did well to get down to and hold.

It was twenty minutes in that Celtic got hold of the game by the scruff of the neck and to Hyde, and Hyde had nothing to offer to stop Celtic. It started with a scissor kick just wide by Kevin Holsgrove from Ben McKenna's whipped in cross. Seconds later, and Hyde didn't clear a corner, letting Scott Kerr to drop the ball back into the mix, Matty Hughes flicked the ball between defenders for Charlie Ennis to run onto and smash the ball past Connor Hunt.

The rest of the half was a back-peddling exercise for Hyde as Celtic overran them time and again, Kerr's effort was well caught by Hunt, while Holsgrove fired narrowly wide after being put into a good position. Just before the interval, Ben McKenna twice went close, the first effort was a routine stop from Hunt the second a full stretch tip around the post after McKenna went one-on-one.

In the Boxing day game, Hyde came out of the blocks fast in the second half, not this time, it was Celtic that roared from the off, and Matt Regan's ball over the top was raced onto by Dominic Calvert-Lewin, one-on-one with Hunt made no mistake and showed great composure beyond his years to slide the ball past Hunt and put Celtic into a 2-1 lead.

Moments later and there was a two goal cushion when Lewin was through again, only to be brought down with a clumsy tackle by Alex McQuade, who got a yellow card, despite being denying Lewin a clear goal-scoring opportunity. That opportunity was restored with a top drawer penalty from Ennis.

While Hyde were still reeling from the penalty, Kevin Holsgrove muscled his way down the wing and put in a stunning forty yard curling pass right into the path of Ennis who took one touch and pulled the trigger to send the Celtic fans into New Year's Day raptures, and score the first hattrick by a Celtic player since Phil Marsh's in 2011 against Vauxhall.

Hyde had two chances, with Luke Giverin and Connor Hughes both on target but King was up to job both times, however, the introduction of James Cadman gave the Hyde defence a whole host of new problems to worry about. And they couldn't handle him, especially when Ennis put him through and he fired past Hunt to give Celtic a four goal cushion going into the last ten minutes, and Cadman celebrated with a gymnastic display!

Celtic were not done yet. Hyde looked like they were going for Pride and three times should have pulled a goal back, the worst miss coming from Bentham who was almost central to an empty goal, and still fired wide, though Erike Sousa and Ryan Matterson both also missed sitters. This profligacy was punished by two more goals from Celtic.

The first was a Lewin ball over the top for substitute Darius Osei to rise up to meet and head powerfully home with only his second touch since coming on. The final goal came again from James Cadman, who had the time and space to pick the perfect angle that would put the ball beyond the reach of Hunt with the easiest of side footed goals.

The win not only put Celtic's negative goal difference into single figures, but also lifted Celtic out of the bottom three, and provided a massive boost ahead of Sunday's trip to Solihull.