Celtic lose out to Boston
By Iain Benson 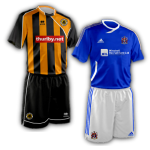 Celtic succumbed to a single goal against Boston United, as Boston broke their 100% record of losses at Bower Fold. Home debuts were handed to Celtic's two new faces, Vinny Mukendi and Byron Walker, who both showed obvious talent, but had a dearth of opportunity.

The first half saw very little action from either side, Adam Pepper and Tom Buckley both firing over after some quick passing build-up play, and at the other end, great reactions from Alex Cairnes denied Gary Silk a goal as his header from close range was athletically tipped over the bar by the Celtic keeper. Jordan Barrow's shot lacked the power to beat Dan Haystead, and Kristian Platt's fierce free-lick drive whistled over the bar.

The second half was starting in much the same vein, but when Barrow dallied on the ball in the middle of the park, only to be robbed by Ian Ross, there was a break-away opportunity for Boston; Ross feeding the ball to the dangerous Spencer Weir Daley, who was pushed wide by the Celtic defence, but found enough space to fire across Cairnes and into the far corner of the goal.

Celtic were looking for equaliser, but struggling to come up with ideas for getting past Boston's defence, that seemed to contain Celtic far too easily. Platt fired his header wide of the post from a corner, and Pepper twice sent the ball over the bar from outside the box, and then Celtic were handed a great chance to equalise when Ben Milnes brought down substitute Mitchell Austin's whose speed and agility had almost got him past the United defender. Pepper stepped up to take the penalty, with Haystead guessing right, and holding the spot kick.

This left Celtic still looking for the elusive equaliser, Jonny Lindsay finding the space but not the power, and Austin cut inside off some intricate passing and forced Haystead into a great close range save with his feet to deny Austin. At the other end, Marc Newsham should have put Boston two ahead, but again Cairnes pulled off a great one handed save from close range. Right at the death, substitute Dennis Sheriff almost became a hero when he shot on the turn, but the ball went the wrong side of the post, clipping the netting as it left the pitch with Celtic's chances of getting anything from the game.