A Barnstorming finish, but Celtic miss out on the play-offs.
By Iain Benson 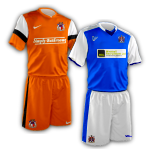 A barnstorming game from Celtic was ultimately insufficient to get into the play-offs as results elsewhere conspired against the Celts to keep them sixth.

Hinckley arrived knowing only a win was good enough, but they were crumbling under some good possession football from Celtic. Greg Wilkinson had a couple of cross-shots that whistled the wrong side of the upright before smashing a dipping effort inches over the bar from twenty-five yards, whilst Stephen Brogan skipped past a man and forced Dan Haystead into a great save, tipping the ball over for a corner. Haystead was there again to deny Callum Warburton after a worked free kick gave the midfielder half a chance. Dennis Sheriff, given his first league start, got half a yard past his marker and fired across the face, and although Brogan was coming at the back post, he couldn't stretch enough to turn it on.

So it was somewhat against the run of play when Lloyd Kerry tried a speculative effort from a half cleared goal mouth scramble in the Celtic box, and though the ball was running straight through to Jan Budtz, Chris Lynch stuck out a leg and diverted the ball past his own keeper.

Celtic needed an instant reply, and it came through some hard work from Craig Hobson, chesting down a lofted ball for Brogan to expertly smash past the keeper, turning onto the volley and firing into the top corner.

Celtic were level on goals, but they made their task harder when Warburton retaliated to Richard Lavery's antics, words were exchanged and Warburton pushed Lavery with his shoulder. Half seen, the referee saw Lavery collapse as worse than it was, and sent Warburton off. It looked like Celtic would be up against it, but Celtic had more in their tank than Hinckley and continued to play the better football. When Lavery brought down Dennis Sheriff when through, right on the edge of the box, there was a call for a penalty and a red card as the last man. Neither was forthcoming, so up stepped Greg Wilkinson to curl his shot low and hard around the wall and under Haystead to put Celtic a goal to the good right before the interval.

Celtic came out in the second half at breakneck speed. Within moments of the restart, Brogan was fed by Hobson and smashed his shot over the two defenders on the line and back off the bar. Celtic continued pressing and Sheriff was almost rewarded for an excellent run, but rolled the ball the wrong side of the post before Sheriff got his second goal for the club racing onto Jack Rea's through ball, outpacing Ben Richards-Everton, drawing Haystead and then firing into the back of the net to give Celtic a two goal cushion.

That cushion was needed when a harsh handball on Brogan twenty yards out gave Craig Farrell a chance to pull one back with a dipping curling free kick that sailed into the top corner.

Brogan couldn't repeat that trick at the other end, firing his free kick into Haystead's hands, whilst Jan Budtz kept the slight advantage for Celtic with a point blank stop from Danny Newton's header.

Moments later and Celtic simply overran the visitors. Mitchell Austin and Andy McWilliams traded passes, McWilliams racing down and curling in a beautiful cross that Steve Brogan met with a sweet left foot strike that left Haystead no chance.

Newton tried a cheeky effort from twenty-five yards that was too hot to hold for Budtz, as he palmed it around the post, whilst at the other end, Haystead kept the score line respectable with an outstanding save when Celtic worked a corner really well and a bullet header from Rhys Meynell was grasped at full stretch by the keeper with Hobson claiming the ball had crossed the line. The official said no, and Celtic were content to play the ball around Hinckley, who showed their dejection in Farrell's half-hearted shot from distance that sailed well wide.

Celtic had needed Nuneaton, Gainsborough or Halifax to slip up, unfortunately, all three won their respective matches, and it is they, not Celtic, who go through into the play-offs to compete for the ultimate non-league prize: The Conference National. Celtic will look back to the games where they should have won, as league's are not decided in one game, but over the course of a season, and this has been a roller coaster of a season. If Celtic continue to improve on their fial position next year, then at least a play-off place will be the reward, if not promotion.