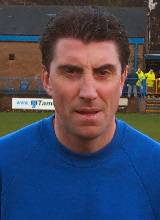 Paul started his career at local side Marine, before being dragged into the League to play for Wigan Athletic in their 1984 campaign, where he played for five years and put in some 185 games.
Leyton Orient knew a good deal when they saw him, and signed Paul from Wigan for a mere ?175,000 (he remains their highest ever signing)! Less than a year later they would get this nearly doubled when Sheffield United snatched him up for ?300,000! As Sheffield United moved into the Premiership, and Paul helped keep them there, but even he could not stop them from relegation. Leeds United returned Paul back into the Premiership again, signing him for ?250,000, where he played for two years before Graham took over at the Yorkshire side, and sold Paul to Manchester City for ?500,000.
He made only a handful of appearances over his two year stay, and Joe Royal decided to cut the wage bill, and sent Paul on loan to Port Vale and West Bromich Albion for the 1997/1998 season. As his contract expired, West Bromich Albion took him on for a free transfer.
Paul moved on from Birmingham, to Blackpool, then on to Chester, where he spent time as Barrow's assistant, and then across the water to Ireland where he played for Ballymena United on a months contract, before moving to Celtic.
Totalling the money paid for Paul gives a staggering ?1,225,000! After such a long football career, it was hardly surprising that he hung up his boots at the end of Celtic's 2001/2 season.
Career
Position
Defender
Born
21st Sep 1965 (55 years)
Joined
20th Oct 2001
Left
5th May 2002
Last App
27th Apr 2002
Last Goal
Never Scored
Career
Appearances
36
Subbed off
4
Goals
0
Assists
0
Red Cards
0
Yellow Cards
0
Points
49 / 108
Average Points
1.36
Wins
15
Draws
4
Losses
17
Total Pitch Time
3105 mins
Appearances
Sponsors
Main club sponsor