No upset
By Debbie Taylor

Chesterfield proved to imaginative for a Celtic side that struggled to prove anything in this match.

The Spireites pressed into attack from the off, and proved why they are struggling, as they wasted several chances, as the Celtic defence soaked up the early pressure, with Crookes performing well in his first start for some time.

Ingledow, Parrish and Payne all missed the target and D'Auria's cross was comfortable for Batty to deal with, as were early headed efforts from Beckett and Payne.

At the other end, Payne and Parrish marshalled their defensive line well, blocking Courtney's first effort before it could trouble Abbey in the visitor's net. Peacock also got into a great position, but his curling shot cleared the cross bar. Celtic looked like they may be able to hold Chesterfield with their five man defensive strategy, as they pushed up field into the division two team's half. Courtney was holding the ball up well, interchanging cleverly with Bushell and Wood, but once again Luke Beckett broke Celtic hearts.

A long ball down field was chased by Beckett. As Beasley came across to cover, Batty raced off his line. Beckett's cool lob over Batty was inch perfect sailing in just under the cross bar.

Chesterfield continued to press after the goal, immediately putting Celtic on the back foot. Beckett was getting the better of Scott in the left corner, with bursts of speed and control giving him the time to put in some good crosses. Fortunately, Beasley and Woods were having the better of the headers.

From one such cross, Woods put the ball out for a corner, allowing Ingledow to sweep one in to the front edge of the six yard box.

Andy Scott's header back to Batty was too strong, striking the far post. Beasley reacted quickly, nodding the ball back off the post into Batty's hands.

The referee was well placed on the line and before Beasley touched it, he had blown for a goal.

Batty was incensed, and harangued the referee all the way to the centre circle, whilst telling Futcher that is had not crossed the line. Regardless of what Batty thought, the referee had decided that it was a goal, and Andy Scott got on the score sheet for another big FA Cup clash at Bower Fold. In a way he did not want.

Courtney decided to try and grab back an instant reply, racing into the Spireite box, he took the ball around Abbey, and the tall Chesterfield 'keeper dragged Courtney down. I've seen keeper's sent off for less, but the referee let Abbey off with a goal kick!

Luck seemed to have deserted the Blue and White once again.

Booty got past Murphy to whip in a cross from the opposite side of the field, but Batty was agile enough to block Parrish's header.

Two goals down and Chesterfield cruising, Futcher's hand was called. From the starting formation it looked like he had intended to hold Chesterfield at 0-0 for as long as possibly before bringing Clements on to tear past tiring defenders. Being two goals down, he had to bring Clements on early, making him less effective - but he still would make an impact. Crookes was the defender to be replaced, reverting to a more traditional 4-4-2.

Clements made his impact by running through the Chesterfield defence, and getting up ended by Payne. Payne made amends by intercepting the free kick at the expense of a corner. Celtic hearts were raised as Peacock swung the ball in. Breckin knocked the ball clear, but Peacock immediately swung it in again. Payne volleyed it clear to set Parrish on a run down field. An excellent sliding tackle from Pickford was judged too strong by the referee. As Pickford had got all the ball and no man, the referee could not send him off, and settled for a yellow card instead.

The free kick was whipped out wide to D'Auria, who turned inside Scott, and crossed in for Ebdon to knock down to Beckett at the edge of the box. Beckett wasted the glorious opportunity, skidding the ball wide. 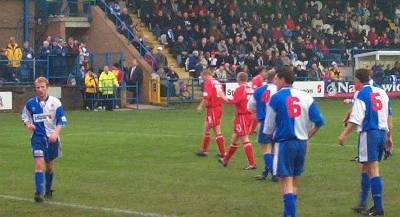 Clements and Courtney both went close, but failed to make it all the way through the well marshalled defence before the referee ended the half.

Celtic steamed out in the second half, with Clements scaring the life out of the Chesterfield defence and producing a fine, flying save from Abbey. Abbey again provided the saving grace, as a Peacock ball in was met by Abbey millimetres ahead of Courtney. Wood too ha a good chance, but scuffed his shot into the path of Edwards.

But Chesterfield were quick, able to turn defence into attack with amazing speed, and pinpoint long balls. Beckett won a corner of Scott after receiving a Payne long diagonal ball. Somehow Beasley blocked Breckin's header. That set Clements off on a run. Perhaps he should have had a shot himself after getting the better of the Chesterfield defence, but instead he tried to thread it through to Courtney, allowing Payne to back track and knock it off Courtney's feet.

The corner eluded everybody.

Chesterfield again came at Celtic, but Pickford stopped them at the half way line, illegally apparently. distance was no object to Payne, as he floated a ball into the box. Reeves climbed all over Woods to reach the cross, and though the ball went in - the referee had disallowed it before he reached it.

Though Clements was trying to get Celtic back into a game they were destined to lose, Chesterfield never really looked troubled.

And it took a stupendous performance from the Celtic back line to keep the scores respectable.

Murphy blocked Reeves' effort for a corner, and Scott cleared the corner. Batty covered thirty yards to beat Beckett to a through ball. Even so, Chesterfield were getting some past the Celtic line. Ebdon trundled one past the offside trap that had caught Beckett on numerous occasions, but Parrish had judged it well, going one-on-one with Batty. Batty stayed on his feet, and Parrish could only knock it wide.

Beasley gave them a corner intercepting a D'Auria cross, which Parrish headed wide. When the referee said corner, overruling his assistant, Steve Wood complained - and got booked.

Wood cleared the corner, with a well sighted ball out to Clements, who interchanged beautifully with Courtney to attack to the Chesterfield goals. However, Chesterfield went back with them in numbers, and smothered the attack before it reached Abbey. Celtic broke again moments later after another Chesterfield corner was cleared, but despite a well weighted ball from Peacock Abbey proved faster than Clements, reaching it first.

D'Auria had taken over Beckett's right wing job, allowing Beckett to prowl around the middle. However, D'Auria's cross eluded the transfer-listed striker, but Parrish cushioned it back to D'Auria running into the box. D'Auria's header was too strong for Batty who had been pulled left and right as the headers bounced around the box, despite the attentions of Woods and Beasley.

3-0 down, Celtic could have been forgiven for giving up. But they looked like they wanted to prove a point, and grab a consolation.

Clements raced past Breckin, the Chesterfield last man hacked Clements down, and escaped without a single card. He again escaped a booking when he crashed into the back of Courtney at the edge of the box, after receiving an excellent squared ball from Clements. This time, he did not even give away a free kick, despite the Celtic number 9 requiring five minutes of treatment.

Chesterfield were living a charmed life.

D'Auria also should have been booked after the offside trap caught him, and in a fit of temper he kicked the ball forty yards into the Celtic net. But hey! It was high spirits.

As the minutes ticked away, Peacock was granted a glorious opportunity.

Clements beat everybody with a mazy run, and cut back to Courtney. With the keeper and two defenders descending on him, Courtney intelligently squared to Peacock, who had an empty net, and one defender to deal with, the Breckin was lunging in, and Peacock lashed at the ball, sending it over the bar. I hope he apologised to Courtney afterwards, and he should apologise in the Advertiser as well.

Celtic were still not done. There was time for Murphy to blast in from thirty yards, only to see Abbey save well. And also time for substitute Parr to head a Peacock Cross into the bottom corner, only to see Abbey somehow leap down and turn it around the post. As Howard cleared the ball, the referee blew for full time.

Celtic had tried, but perhaps had chosen the wrong tactics for the game. When Celtic had gone at the visitors, they had looked shaky and vulnerable. Allowing them to come at Celtic with the five man defence was, in hindsight, asking for trouble. But the tactic may have worked, with a fresh legged Clements slicing the Chesterfield defence on the hour to grab the only goal of the game. Sadly that's not the way it turned out, and whilst Chesterfield have some much needed money to put towards saving the antique club, Celtic must concentrate on staying in the Conference.