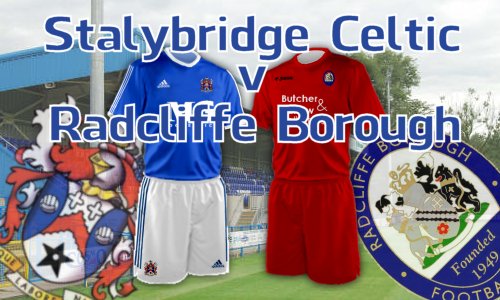 CelticThrough To The Final
By Debbie Taylor 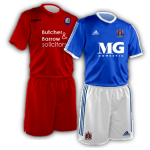 Celtic had to come from a goal behind to progress through to the final of the Manchester Premier Cup against a spirited Radcliffe side.

Most of the goal mouth action was at the Radcliffe end, with John Shaw heading into Chris Cheetham's hands off a corner to register the first effort on goal. A series of corners went begging before Bohan Dixon twice went close, the second effort whistling narrowly passed the post. Radcliffe were rapid on the break, given just warning when Sam McMahon found Steve Foster, but Celtic got lucky that time, as they did when McMahon's free kick was too wide.

Radcliffe took the lead when McMahon skipped past the defence to go one-on-one with Tony McMillan rushing out to narrow the angle, and it looked for a moment that McMahon had missed, but Steve Foster arrived at the back post to tap home.

Alex Johnson had a claim for a penalty waved away when he was up ended in the box by Rick Smith, but a corner only was given, which Celtic couldn't use, and Celtic finished the half as they?d started with Alex Mudimu seeing his shot scream past the wrong side of the post.

Celtic started the second half at pace, and Alex Johnson finally didn't get a bit of bad luck in front of goal, when Jack Higgins flicked a free kick across the face of goal where Johnson came in, under pressure from the Borough defence, and slid the ball home.

Mudimu twice went close, the first a screamer, the second a grass cutter, both just wide. It was a foul on Mudimu that allowed Celtic to get their nose in front, when Jamie Forbes slid through Mudimu and Dale Wright's free kick evaded everybody and though Cheetham got a good pair of hands on it, the ball span away from him and trundled across the line.

Celtic had a purple patch looking for the goal that would put the game out of sight, Alex Johnson getting on a fantastic Bohan Dixon cross, but couldn't direct the shot. Adam Farrell's curling shot through a crowd pulled a brilliant save from Cheetham who had to have seen the shot late. It wasn't all Celtic's way, and Steve Foster's bobbling, effort was pushed round the post by McMillan.

Celtic really, absolutely really, should have been two up when Dixon's cross was met by a sliding in Adam Farrell, with the goal at his mercy, he somehow contrived to lift the ball over the bar from a foot out. Farrell wasn't quite as close five minutes later when his shot curled past the far post, and finally got on target when he rounded Cheetham, and went for the tap in, only for Jamie Forbes to come in and block on the line. Steve Tames fired the corner wide as the game went into the last five minutes.

With time running out, only a goal behind, Radcliffe pressed, and pressed hard. Substitute Elliot Rokka twice went close, and probably should have equalised off the second, but not so much as Rick Smith, who was set up beautifully by Tom Hulme, and fired almost straight at McMillan. Frustration from that save may have led to the completely unnecessary stamp he did moments later on Steve Tames, right in front of the referee. He had to walk, though he took some persuading.

Celtic then capped off the performance, and ensured that there was definitely no chance for penalties when Dixon again produced a brilliant cross that wrong footed the solitary defender who had gone to Steve Tames, only for the ball to go to Aidan Chippendale, who took the ball in his stride, and he wasn't going to miss, one-on-one.

So Celtic go through to the Premier Cup Final to make up an all Tameside tie, as we face Mossley.