Points snatched at the death
By Iain Benson 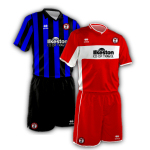 Celtic's new manager, Jim Harvey, watched his side put in a much more committed performance of late, but to lose to a gut-wrenching last second goal from Ilkeston.

Ilkeston are a defensively strong side, who were always going to be difficult to break down, and though Celtic enjoyed much of the early possession, the early chances fell to Ilkeston, with Gary Rickets heading into the ground and over the bar with the goal at his mercy, and Charlie O?Loughlin headed a corner well wide in the early exchanges. From a second corner for the home team, nobody picked up Gary Ricketts at the back post, and he made no mistake this time, powering a header into the back of the net from close range.

Ilkeston seemed content to sit on the lead, and Celtic's chances started flowing, with a ball from O'Neill flashing across the face needing a touch, and O'Neill lifting it over the bar when put through by Keith Briggs. A trio of corners came Celtic's way, culminating in Warren Peyton flashing a fierce drive wide from the edge of the box, followed closely by Dave Hankin beating his man and cutting inside only to drive past the wrong side of the post. An excellent snap shot from Briggs from twenty yards had to be tipped over the bar at full stretch as Dan Lowson proved why he is an excellent keeper, and Steve Woods headed the corner wide.

After finishing the first half strongly, Celtic started the second in the same vein, and after a foul by Luke Waterfall near the corner flag Joe O'Neill showed a great deal of courage to glance his header under immense pressure just inside the upright to draw Celtic level. Ilkeston tried for the instant response, but Matt Godden's effort was directed straight at Dave Carnell, whilst Dan Holmes curled his free kick over the bar by some margin. Jody Banim very nearly gave Celtic the lead but for the save of the match from Lowson, Banim spotting the home keeper off his line, and firing in a looping shot destined for the goal, only for Lowson to backpeddle and stretch, tipping it out for a corner.

Ilkeston broke from the corner, and a long ball up for Amari Morgan-Smith was knocked down to Paul Dempsey as Celtic struggled to clear and Dempsey got the final telling touch to force the ball over the line and restore Ilkeston's lead.

This time, Ilkeston did not attempt to defend the lead, and the game was very even. Matt Godden forced a good stop at the near post from Carnell, but O?Loughlin's header was straight at Carnell. At the other end, Andy Smart had a speculative effort clumsily caught by Lowson, and Peyton forced the Ilkeston keeper into a stupendous flying save with a thunderous shot from just outside the box that moved a considerable distance through the air, but fingertips were enough to diver the ball out for a corner.

From the corner, Connor Jenning's initial effort was parried by the keeper but Lowson was helpless as O'Neill turned it back towards goal only for Rory Coleman to palm the ball away to safety on the line. No question about it, a definite penalty, and Coleman had to walk.

It was Andy Smart's turn for a penalty kick, and his was the pick of the last few Celtic have had, with plenty of power but Lowson got a trailing leg to the ball. Unfortunately for Lowson the ball came straight to Andy Smart, who didn't hesitate and tapped the ball in over the prone form of the keeper and restore the parity.

As injury time edged ever closer, all the possession was Celtic's and Ilkeston were being forced further and further back, and right at the death, with less than a minute of stoppage time remaining, Celtic won a corner.

With Woods and Hardiker committed up front, when the ball was sent down field, Ilkeston raced up with it. Both Battersby and Smart got across to try and intercept, but the ball was threaded through to Jack Watts, who scrambled the match winning goal across the Celtic goal line with barely enough time to take the restart.

A draw was possibly a fair result, with both sides evenly matched, and to have the points nicked away at the end was heart-wrenching.