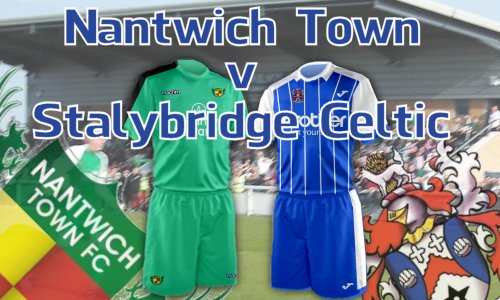 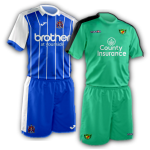 On Tuesday, Celtic make the hop over to the other side of Cheshire to face Nantwich (kick off 7:45pm). Nantwich are currently thirteenth in the league on forty-five points, eight places and seven points above Celtic having played two games more. There will be no Match Centre but there will be a Twitter feed.

Nantwich lost their opening game of the season, to Celtic, but then lost only once in the next eight games, although they only won three over that period, drawing the other four. A run of five straight defeats saw them drop to bottom in the league, they have been inconsistent since. They have not won in their last three with two home losses and an away draw at Grantham. The have had two wins in their last seven, and in their last six home matches have won two and lost four, their wins coming over Lancaster at the end of January and Grantham at the end of February. In all seventeen home games this season, they have won six, drawn four and lost seven.

We beat Nantwich 1-0 on the opening day of the season, with Alex Honeyball the scorer. Our last visit to Nantwich was a friendly, that we won 2-1, whilst our last competitive visit was in the Cheshire Senior Cup which we lost 1-0 back in 2010. Our last win over the Dabbers on their own ground was a 3-0 win in the FA Trophy, which we won 3-0 in 2009 with goals from Matty Barlow, Joe O'Neill and Keith Briggs.

Jack Walton was recalled by Barnsley, who had a keeper crisis, but will be available again on Tuesday, although Aidan Winterbottom stepped up to the plate and performed well.

Celtic's recent form has been a miraculous turn around form early season, and now sit seventh in the form table, with two losses in our last ten, taking fifty-nine percent of the available points, just above Nantwich in eighth who have taken fifty-four percent of the available points. Three away wins in our last four away matches have also seen us rise up the away form table. Winning our two games in hand and beating Nantwich on Tuesday would put us above the Dabbers, so although there is currently a large gap, it is a false gap. If we win, we would rise a place, whilst a loss or draw would see us stay where we are. More importantly, if we win and results go our way, Celtic would be within striking distance of sixteenth, and with our games in hand, within striking distance of the top ten, a position unthinkable at the end of 2017.