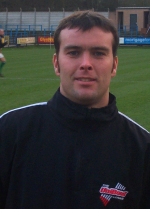 Bury born Ben began at Manchester United as a trainee at the start of 1993. During his five years at the Red Camp, he suffered a serious injury, and to recover he was sent out on loan first to Stockport County, and then to Huddersfield Town. In June 1998, Huddersfield made the move permanent at a cost of ?175,000 to them. He notched up over 100 appearances for the Yorkshire outfit scoring 7 goals during his three years with them. In August, 2001, Ben travelled to foreign climes, playing for Aberdeen in the Scottish Premier division. During his year, he made over 30 appearances and scored 3 times. December is possibly the worst month of the year to visit Blackpool, but in December 2002, Ben did just that, joining the Tangerines for a year. He never really got going in the Blackpool side, and moved to Bury in September 2003. He's made 5 first team appearances for Bury thus far, but was never awarded a full-time contract, and was eventually released, at which point he joined Celtic, played 6 times, and then departed again.
Career
Position
Midfielder
Born
21st Apr 1975 (44 years)
Joined
15th Nov 2003
Left
19th Dec 2003
Last App
13th Dec 2003
Last Goal
Never Scored
Career
Appearances
6
As Sub
1
Goals
0
Assists
0
Red Cards
0
Yellow Cards
0
Points
5 / 18
Average Points
0.83
Wins
1
Draws
2
Losses
3
Total Pitch Time
450 mins
Appearances
Sponsors
Site Sponsor