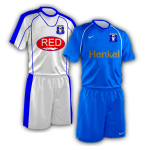 A penalty from the penalty king, Gary Bauress, sewed this game up, without it ever warming up.

This was truly a second gear performance by Celtic. And that was all that was required. For the entire first half, Gary Ingham need not have turned up, as Winsford failed to have a shot on target.

Matt Conkie between the Winsford Sticks had a very good game, keeping out blistering shots from McNeil and Parr, with the Filson going close against the cross bar. However, it looked as though Celtic would never score, until Jones was brought down in the box on 36 minutes.

Bauress stepped up and slotted the ball past Conkie. From here on in, it was a coasting performance by Celtic.

In the second half, Winsford did manage to play some reasonable football, mainly down the left wing with Steve Shaugnessy making most of the running. This at least allowed Ingham to feel part of the game, although he was never seriously troubled. Winsford remain without a serious goal scorer, and it showed.

From one of the many Celtic corners in the second half, Filson nodded the ball into the back of the net. From what I recall, the referee gave this as a goal. However, according to the last match day programme, Filson has not been credited with the goal, and the score is given as 1 nil to Celtic. Either 1-0 or 2-0, the result does not really show just how much Celtic dominated this game without ever really trying.