Wake up call
By Debbie Taylor

Stalybridge received a rude awakening to Conference football. Though for brief spells they acquitted themselves well, they never looked likely to score.

Stevenage started the game, breaking down the left, where Hay was allowed sufficient time to pick out Williams with a weighted cross that the Stevenage target man, Martin Williams headed wide of the post.

Celtic responded, raising the hopes of the 150 or so travelling fans when Ingham's clearance eventually came to McNeil, who turned his marker inside out, and was pushed over, blatantly. The free kick was not well struck by Peacock, allowing Trott to head it away to a throw in. For the first ten minutes it looked like Stevenage might have a game on their hands. This was especially true as Peacock managed to get himself into several good positions, though his final ball into the box was lacking, either caught by the keeper, or headed clear.

McNeil also started the game as a danger man for the southern team, forcing a corner on 15 minutes that was delivered with dangerous pack, and only just flicked out by Dreyer. The ball came to Perkins, who sent the ball back into the box, but before a Celtic head could be put on it, the linesman indicated that it had gone out of play.

Celtic continued to press, forcing another corner. This time, it was not put in well at all, coming in about waist height. This was knocked around the post by a Stevenage defender, for a second corner. Again it was put in low by Peacock, but this time it was knocked well away for a throw in.

Stevenage lofted a ball down the wing, that Mattie Woods met, knocking it for a throw. The long throw came into Martin Williams. He had several options, but he chose glory, heading it simply into Ingham's hands. This was a pattern that Williams would repeat time and time again.

Celtic's response was to come straight back through midfield, knocking the ball with confidence, stringing together about seven or eight passes to get the ball into a position where Ward could lob in a good cross to McNeil at the edge of the box. McNeil knocked the ball back to Courtney, unmarked (unlike McNeil) but his half volley was of insufficient power to bother Wilkerson in the Stevenage nets.

Stevenage then used a series of bizarre free kicks to move the ball up the field. Firstly obstruction, then a climb by Perkins left the ball about forty yards from the Celtic net. Adrian Clarke whipped a ball in. In struggling to reach the cross, McNeil, back defending, bent his body around Williams. Williams threw himself to the floor so hard he left a depression.

Hamsher stepped up. Ingham went the right way, but the ball was top corner all the way, and Ingham had no chance.

Celtic seemed to run out of steam and ideas after this, and we were only 20 minutes into the game!

Pickford, committed as always, was desperate to get some momentum back into the Celtic line, and got a yellow card for his trouble when he crashed in from behind on Dreyer. Williams returned the favour leaving Steve Wood on the floor a few moments later, with the first bit of consistant refereeing I'd seen, he too got a yellow card.

With a goal cushion, Stevenage looked slightly more relaxed in the top third of the field. Adrian Clarke got to the touchline to get on a long ball, which he bicycle kicked into the box. Williams nodded it goal bound, only to find Ingham stood exactly where the ball was going.

Stevenage got a double corner on the half hour mark, but Futcher was on hand both times to clear. However, it was a sign that Stevenage were looking for a second. In another display of greedy behaviour Williams neglected his team mates of Hay and Clarke, and tried to take on the Celtic back four. Forced further and further wide, he eventually got a powerful shot off from a narrow angle. It was too close to the net to be a cross, and too far from goal to be a threat.

In a rare display of generosity, Williams proved he could cross the ball, and looked dangerous when he did so, as Armstrong headed over the bar, though Ingham had it covered. Stevenage also took advantage of some bizarre man in black decisions. When Hay tried to remove Futcher's head, and came off second best (Futch's head is a long way off the ground!) the ref stopped play. I do not know which rule was invoked, as it was not a head injury. If anything it was a foul, but the drop ball instead was passed back to Ingham. And lo! Hay was up and running seconds after limping off the pitch with every bone in his body broken. An effective way to stop a promising Celtic attack.

Courtney and McNeil need to work together more, as just before half time, they crashed into each other going for the same ball.

a tiny bit of promise showed just before the whistle, when Celtic got the ball into McNeil, who's lay off to Courtney saw him force a stop from the keeper that rebounded back to Peacock. The ball back in was missed by the keeper, but Dreyer was on hand to nod the ball out.

In the second half, Celtic seemed to adopt a new style of play that was not suited to either attacker. Our best moves had been where McNeil was allowed to take ball under control, and get around defenders, whilst Courtney darted through and made space well. Neither was suited to the lofted ball in, and flicked onto the other attacker, and it made them look like Sunday league players. 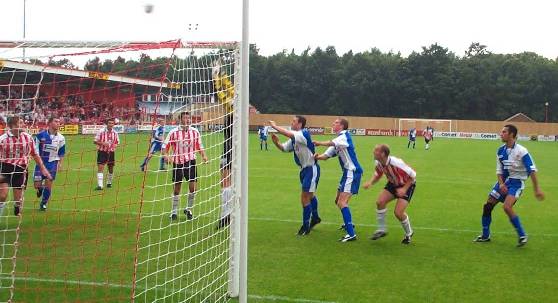 Stevenage brought on veteran attack Morgan for Darren Hay during the interval, and he quickly attempted to get on the score sheet as he got a foot onto Clarke's cross, but saw it go over the bar.

As Celtic did not have enough trouble, Futcher granted Stevenage a free kick three yards from the box when he was adjudge to have pushed Clarke. Walter's shot was over, wide, and generally rubbish. Moments later, he gave another free kick away as Walters backed into him, this time near the half way line. However, he showed his ability on intercepting crosses all afternoon, heading them away to safety.

Though McNeil was coming deeper to try and stop the defence lobbing balls too him, precious little was happening for him, and every Celtic attack that broke down was swiftly countered. Williams looked a danger all afternoon, breaking and running with the ball. However, his greed got the better of him on too many occasions, usually ending up with either a goal kick, or Ingham catching comfortably.

Stevenage were going in for some very late tackles in the second half, and received a couple of yellow cards, though the ref looked to be slightly lenient towards them (even choosing to ignore an offside flag for them!).

Just after the hour mark, a Clarke cross came in, met at the back post by Morgan. Ingham made a fantastic reaction save to deny the striker, but the rebound fell kindly to Williams, and despite protestations of handball, his toe poke over the line counted. 2-0 to Stevenage.

From the kick off, Celtic attacked, with Peacock making some space for a shot at the edge of the box. It beat the keeper, but Dreyer was on hand to snap it off the line. It came back to him. Again Peacock beat the keeper, but Dreyer again got a thigh to the ball, putting it out for a corner. The corner was cleared,and Armstrong broke very quickly, getting one on one with Perkins, and putting the ball in for a cross, but it was too hard and Clarke could not reach it.

The throw was not cleared properly, allowing Morgan to attack the ball. Ingham came from the cross, but was barrelled into by Morgan. Perkins cleared off the six yard line, back to Morgan, who attempted to lob Ingham Ingham got a fingertip to the ball putting it over the crossbar.

Into the last quarter of an hour, Celtic started to get some fluency, but the final ball was lacking. Mattie Woods could not reach Peacock, and balls into the box were desperately defended by Stevenage. McNeil was desperately unlucky on two occasions, and Courtney tried to play him through in a third, but misjudged completely where McNeil would be. The pair need a lot more games together to get the kind of scoring form seen last season.

Scott and Murphy replaced Pickford and Ward in an attempt to work more balls through the midfield. It did not really have the desired effect. Steve Wood started to put some dangerous balls in, and Bushell would have been a certainty to score, had not Dreyer's head got in the way of the ball.

As the game drew to a close, McNeil finally got a ball he could do something with, and showed the crowd why he was a man to watch, when he dragged past one defender, twisted past another, and lobbed the onrushing keeper. The ball clipped the top corner for a goal-kick. It was just not going to happen.

Murphy;'s first real touch of the game was to deny Clarke a goal, heading around the post. Futcher again showed his defensive ability clearing the corner.

Almost with no time to do anything, Winfield Steele came on to replace the tiring Courtney, though he never really got chance to get hold of the ball and run at the Stevenage back line.

Stevenage tried to stamp their authority back onto the game with another break. Futcher was adjudged to have impeded Williams, when Williams earned 6 across the board for a spectacular dive. Clarke's free kick was closer this time, scraping the crossbar.

Clarke was again in action moments later putting the ball in for Morgan, but Perkins was on hand to put it for a corner. Scott put his head on the corner, and put it out to safety.

On forty five minutes, Perkins earned himself Stalybridge's second yellow by foolishly kicking the ball into the crowd after the throw-in decision of the linesman was overturned by the referee.

Stevenage ran down the time with a couple of substitutions, whilst Celtic tried to grab a late consolation. Steele took on three defenders but found every path blocked, and eventually laid off to Perkins, who blasted from forty yards out, about the same distance over the bar. Stevenage took about thirty seconds to locate a new ball. Not that the ball was used much, as the final action of the game was a Morgan cross in deflected for a corner over his own bar by Murphy, and a clearance that ended the game.

This was a defeat for Celtic, and a wake-up call. The strikers were not used to the best of their ability, and the midfielders were struggling to get the right ball to them. The defence was under a lot of pressure because of this, even so, the two goals, one dubious penalty, and a persistence from a substitute showed the the defence is strong. Only time is going to gel the team together, and the clock is ticking.