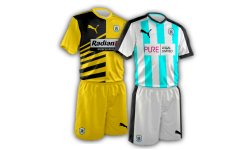 Despite the unflattering score line, it was another good performance for Celtic, but three late goals gave Huddersfield a score line that flattered them somewhat.

Huddersfield's John Stead started the attacking for Huddersfield, his good movement giving him half a yard but he fired across the face and out, whilst Harry Bunn produced a good stop from Lewis King. It wasn't all Huddersfield in the opening stages, Celtic were giving as good as they got, with Matty Mainwaring's distance effort needing a decent stop from Lloyd Allinson in the Huddersfield goals.

A goal was coming, and it came through Stead and Bunn combining, Stead's strength creating the space and time to feed the ball to Bunn, who fired in a powerful shot that had too much on it for King to keep out, although he got a hand to it.

It was almost an instant reply for Celtic with Matty Hughes's powerful header off a corner requiring a very good stop with his feet from Allinson.

Huddersfield doubled their lead on twenty minutes again Stead showing why he was once a million pound player, balance and strength and skill to nip into space and fire in a superb shot that King could only fling himself at without ever hoping to reach.

Again, Celtic looked likely to pull one back, Hughes putting a powerful header just wide and McKenna cutting inside and forcing Allinson into another stop, and Liam Dickinson forced Allinson into his best save of the match just before half time, from a free kick that swerved and dipped as it flew over the wall, requiring a reaction parry from Allinson, and then a recovery as there was a scramble for the ball.

The second half continued with Celtic putting in a good shift against very strong opposition; Charlie Ennis went close ghosting through the defence, and McKenna's low cross to Aidan Chippendale was drilled wide of the mark, while at the other end, Ian Stead again made the space to get one on one with King, but this time King came out on top with a great block. King also produced a fine stop as Sinnott found space.

As the game went into the last ten minutes, Huddersfield added a gloss to their score line that Celtic didn't really deserve. Danny Carr was one-on-one with King, who pulled off a superb stop to deny him, the loose ball flying up, but as he tried to claim the ball, King fouled Carr, and conceded a penalty that Carr took. Again King was the hero, making a great penalty stop but the Celtic defence were motionless for the rebound, and Ben Holmes came in and fired home.

Finishing stronger was always on the cards for the Championship side, and Ed Wilczynski twice got past Kelvin Bleau at speed, and put in two low crosses, the first turned in by Carr, and the second, right at the end of the game, turned in by Ben Atkinson. A Celtic trialist did get hsi head on Mainwaring's back post cross to head powerfully towards goal, but again Allinson was on hand to keep his sheets clean.