Celtic ease into the season
By Six Yard Sam 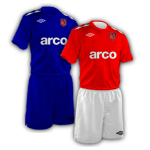 Celtic started with most of the first team, though Joe O'Neil sat the game out with a slight strain, and eased into the pre-season campaign with a sedate 4-0 win. Two goals from Matty Barlow at the start and end of the first half were added to in the second half with Michael Bowler and Connor Jennings finding the net early in the second half. Matty Barlow missed a penalty midway through the second half, but by this time it didn't matter. The end result was not as important as the game itself, which saw three trialists take to the field, including a possible stand-in for Paul Phillips. Celtic's team was from: Paul Phillips, Richard Battersby, John Hardiker, Andy Smart, Dave Hankin, Michael Carr, Greg Wilkinson, Warren Peyton, Matty Barlow, Connor Jennings, Barrie Keeling, Keith Briggs, Michael Bowler, and the tree trialists,
Stone Dominoes
0 - 4
Stalybridge Celtic
Barlow, Matty 7, 38
Bowler, Michael 48
Jennings, Connor 51
Stone Dominoes
0
Stalybridge Celtic
4
Barlow, Matty 7, 38
Bowler, Michael 48
Jennings, Connor 51
Sponsors
Main club sponsor