Celtic through to the next round
By Iain Benson 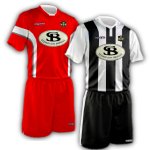 Celtic go through to the next round of the Cheshire Senior Cup after just about seeing off Alsager Town, but Alsager made it very difficult.

Despite numerous starting line up changes, the football still looked good at times, but the only goal of the match was bumbled over the line in the opening minutes: a corner was whipped in and not dealt with, Keeling got both shins on the ball, sending it towards goal, and a stretched leg from Sharpe poked the ball over the line.

After this, Alsager defended admirably and in number, and could even have equalised immediately through Whitney, but he lacked the power in his shot to trouble Phillips. Smart saw a powerful shot blocked on route to goal, and Joynes?s looping shot was caught by Ellison in the home nets, as was his header from a corner. Ellington twice got into good positions, but fired over the bar, and Platt scuffed his shot wide after a half cleared corner fell to him at the edge of the box. Just before the interval, Platt had a better effort, but Ellison got across his goal well to tip the ball around the base of the post.

Some brave keeping in the second half kept Celtic?s score down when Ellison went down to first block at Barlow?s feet, and scrambled across to block Ellington?s effort on the rebound using his face, which left him out for the count for a couple of minutes. A mistake at the back went unpunished by Alsager, when Roberts skipped past the otherwise rock solid Sharpe, and with only Phillips to beat skied the shot.

It continued to be a case of Celtic couldn?t force the ball into the net as the game wore on, with Smart unable to fire through the crowd, and O?Conner failing to get the power needed to beat Ellison. As the game went into stoppage time, Barlow diverted a corner towards goal, only for Ellison to scoop up the ball, and at the death a wild shot from Roberts failed to hit the target.

The game was by no means all one way, but the majority of the game was played by Celtic; Alsager were well drilled and able in defence, and more than a bit fortuitous, but the number of goals is irrelevant in a cup match.