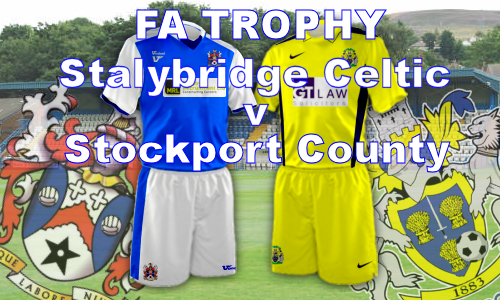 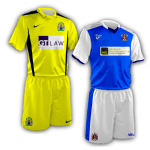 Celtic have it all to do again on Tuesday night when we face Stockport County after a heroic draw at Edgeley Park. Kick off 7:45pm. There will be a match centre for this game, but it may start late.

Rhys Meynell was sent off in that match but the suspension won't kick in for a fortnight, just in time for the Hyde matches. Connor Jennings grabbed both goals in an exciting match at Stockport, with Stockport seeing a penalty saved to set up the replay.

Stockport's away record has been poor this season. After starting the season with seven away draws, six of which were 1-1 draws, until they lost 4-0 at Wrexham. Stockport followed this with a 2-0 win away at bottom placed Bath. Since that win, Stockport have lost their last three away games, with Ebbsfleet and Fleetwood beating them 2-1 and Grimsby hammering them 7-0. Saturday's two goals in the Trophy were the first goals in four matches.

Stockport's top scorer this season is Nick Chadwick with seven goals. Tom Elliot is his closest rival on five. Around the hour mark is Stockport's most dangerous time, with eight of their twenty-six goals scored in this period, whilst the last quarter of an hour is their most vulnerable, with nine of their conceded forty-two goals occurring in this period. They score an average of a goal per game, and concede 1.8 goals per game. On the eight occasions that Stockport scored first in a match, they have won three and drawn four, losing only once. In all three of their wins, they have kept a clean sheet, and have failed to win any games in which the opposition score.

Celtic will feel that with eleven players on the field and home advantage, that Stockport are there for the taking, but as Saturday showed, a bottom Conference club are still a good club. Celtic will be looking to the fitness of Kristian Platt to try and give the defender some vital matches to cover Rhys Meynell during his suspension. In the Trophy match, Celtic lined up as:
1. Jan Budtz
2. Joel Bembo-Leta
3. Andy McWilliams
4. Rhys Meynell
5. Chris Lynch
6. Jack Rea
7. Steve Brogan
8. Greg Wilkinson
9. Craig Hobson
10. Lloyd Ellams
11. Connor Jennings

Having seen Stockport play against Celtic, Jim Harvey will have his team fully prepared for Saturday night. The automated prediction algorithm is suggesting that Celtic will win 1-0, and put us through to the second round. The draw for the next round will be made Monday lunchtime.