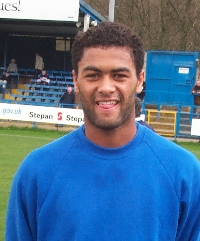 On loan from Loaned from Crewe Alexandra
Since joining Crewe in June of 2000, Phil has failed to break into the first team, and has been sent on loan to Hyde United, and Hednesford Town. We're his third loan club in 2 years! He scored for Crewe against Altrincham to win the Cheshire senior cup this year! And during his spell at Hyde, he played on the wrong end of a 3-1 score line for the Tigers. He has risen from the ranks of Wolverhampton's Sunday League football side Gala FC (Yes, as in the bingo hall!). He has, apparently, a cultured left foot, and he joins on a months loan.
More strangely, Phil has his own stalker, who watches every match he plays in. You can read reports on Phil at Trainers Travels!
Career
Position
Midfielder
Born
3rd Jul 1981 (39 years)
Joined
30th Mar 2002
Left
5th May 2002
Last App
16th Apr 2002
Last Goal
Never Scored
Career
Appearances
4
As Sub
1
Unused Sub
2
Goals
0
Assists
0
Red Cards
0
Yellow Cards
0
Points
1 / 12
Average Points
0.25
Wins
0
Draws
1
Losses
3
Total Pitch Time
300 mins
Appearances
Sponsors
Main club sponsor