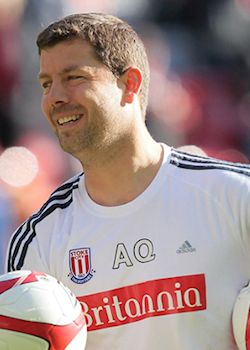 On loan from Bristol City
Andy came in as cover for Steve Sherwood on loan from Derby County. He started with the youth team at Tottenham Hotspurs, making it to the first team, but only as far as the bench. After his return to Derby he was released and Grimsby Town in 1996. After there he went to Stevenage in 1997, making no first team appearances at either, before his release he was on loan at Kettering, and then joined Hereford where he made nearly a 100 appearances until 2000. He is currently the goal keeping coach at Stoke.
Career
Position
Goalkeeper
Born
4th Jul 1976 (44 years)
Joined
21st Sep 1995
Left
1st Nov 1995
Last App
14th Oct 1995
Last Goal
Never Scored
Career
Appearances
4
Goals
0
Assists
0
Red Cards
0
Yellow Cards
0
Points
9 / 12
Average Points
2.25
Wins
3
Draws
0
Losses
1
Total Pitch Time
360 mins
Appearances
Sponsors
Site Sponsor