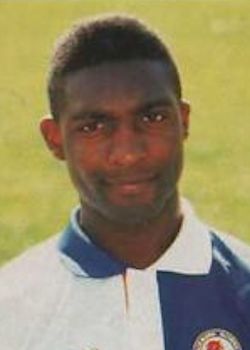 Richard came through the youth ranks at Nottingham Forest, and on his release joined Derby County in 1984. Stints at Ilkeston Town, Sheffield Wednesday and Grimsby Town were followed in 1986 by a season with Grantham Town, where he made 23 appearances, with a spell on loan at Boston United. After a spell in Ireland with Derry, he went to Kettering Town, here he caught the eye of a Blackburn Rovers scout and moved to them in 1991, going on to make 28 appearances over three seasons, with some time spent on loan at Maidstone United, and then joined first Blackpool, then Stockport County in 1993. He then dropped out of the league to rejoin Kettering, before moving to Bacup Borough in 1993, then Mossley a season later. Celtic signed Richard from Mossley, and after Celtic he joined Altrincham, and later Rushall Olympic. After retiring from football, he joined FC United of Manchester as a reserve team coach.
Career
Position
Defender
Born
13th Jan 1967 (53 years)
Joined
1st Apr 1996
Left
30th Jun 1996
Last App
23rd Apr 1996
Last Goal
Never Scored
Career
Appearances
6
Subbed off
1
Goals
0
Assists
0
Red Cards
0
Yellow Cards
0
Points
13 / 18
Average Points
2.17
Wins
4
Draws
1
Losses
1
Total Pitch Time
510 mins
Appearances
Sponsors
Site Sponsor