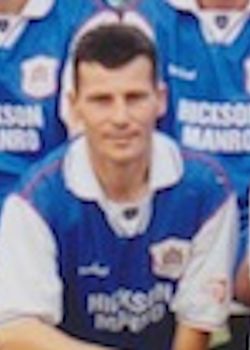 Mark was ever present for two seasons at Celtic. Before Celtic he was with Gateshead. He started out at Whitby Town in 1983, followed up with stints at Grimsby Town, Darlington (126 appearances), Peterborough United and Scunthorpe. In 1992 he joined Doncaster Rovers, leaving for Gateshead after a season and 18 appearances. After Celtic, Mark had a host of non-league clubs: Spennymoor, Whitby, Gateshead, Goole, Harrogate, and in 2001 joined Armthorpe Welfare, before ending his career at Frickley in 2003.
Photographer