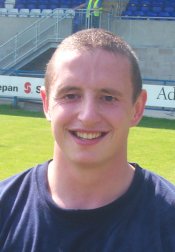 Steve Foster has joined Celtic from Hyde United, the first Tiger to make that journey since 1992 when Paul Kirkham joined to score on his debut against Bath (our first ever Conference goal). He started his career at Blackburn Rovers in the reserve side, but he reached a point where the only way he could progress was by playing first team football, and he was sent out on loan to Wrexham. Upon returning from loan, he made the dramatic switch to Ewen Fields where his brother, John, was club captain. Somewhere along the way he also switched from central defender to top class striker. A good holder of the ball, accurate with feet and head, he was voted player of the year at Hyde, before joining the best team in Tameside. After half a season of playing out of position and warming the bench, Steve requested a move, and Radcliffe Borough snapped him up for ?2,000, where he has gone on to become something of a goal scoring hero!
Photographer