The club are thrilled to announce the signing of defender, Declan Walker following his departure from Aberystwyth.

Having been their club captain for the past two seasons, Stalybridge have managed to capture a versatile defender who is also a leader within the dressing room.

27-year-old Declan has also featured for Aberystwyth at right-wing and centre midfield and was the clubs top scorer during the 2017/18 season, scoring 14 goals from right-back.

Before joining Aberystwyth, Declan spent four years at Bangor City and played 19 games for Wrexham in the National League, having come through their academy. During his time at Bangor, Declan featured in their Europa League qualifying campaign.

He has also featured for the Republic of Ireland’s Under 19’s side. / Club News / Sun 21 Jun 20
Krisel Prifti Arrives At The Fold
Celtic are delighted to announce the signing of Albanian midfielder Krisel Prifti. Krisel joins the club following a spell at... 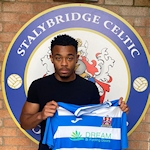 / Club News / Sun 21 Jun 20
Kallum Mantack Agrees To Stay For Another Season
Celtic are pleased to announce that Kallum Mantack has re-signed with the club for another season. Kallum initially joined Celtic in...
Load More...
Sponsors
Site Sponsor