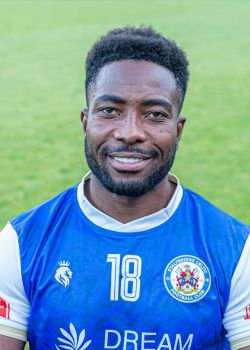 On loan from Rochdale for a month
Nigerian born Abadaki has come through the Rochdale youth system making his first team début in January 2012 after a loan spell with Hyde in the 2011/12 season making ten appearances and scoring twice. His first game was against Tranmere Rovers, as a substitute, and then again (as a substitute) against Wycombe. He also spent a long loan at Huddersfield Town on a youth loan in the 11/12 season, where they extended the loan after seven starts and three goals for the Huddersfield youth team. He was described by Steve Eyre, the youth coach at Huddersfield, as a physical striker with good body strength who can hold the ball up even when played as a loan striker. Godwin has just finished a loan spell at Southport.
Photographer