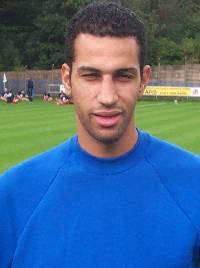 Mathew came to Celtic, played 6 outstanding games (he scored in his debut against Emley), than vanished off to Woking. He just could not stay away, and returned after just two months. He started at Burnley, then on to Altrincham and Woodley Sports before coming to us. Runcorn FC Halton paid for his services, and after that he has become somethign of a goal-scoring fiend at Hyde United.
Photographer