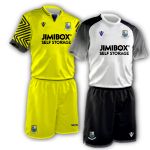 The pitch played a significant part in this scrappy affair.

Celtic settled quickest with a pitch that has seen some battering over the past few weeks of rain. However, the slick surface coupled with sticking mud meant that the first ten minutes were spent dealing with injuries from mistimed challenges.

Once both teams got the measure of the pitch, Celtic turned on the pressure, though found it difficult to get on target. Early attempts from Sullivan and Parr were narrowly wide, while McNeil's bullet header cleared the crossbar.

When Celtic's range finding was complete, they found Billy Stewart in the Brig nets on admirable form, stopping both a diving header and an overhead volley from McNeil onm the half hour. Minutes later, a Ward cross found McNeil unmarked in the box, but his low shot was parried by the keeper, straight into the path of Parr. However Stewart performed an heroic double save, hanging on to Parr's blasted shot. He saved again, from a Jones header after a fine Andy Scott free kick, and Jones' low half volley was tipped around the post.

The 490 fans who braved the miserable weather thought it was going to be one of those games.

Then, Sullivan stepped up to take the corner. He swung it in, Filson headed back across the six yard box, where Jones pounced and forced it past the despairing Stewart. A goal on the stroke of half time.

The second half saw a repeat performance. Celtic pressure with few and ineffectual attacks from Bamber Bridge. Jones could have had a hat-full (including a sitter after the keeper rolled the ball out, he intercepted and missed the empty net!), and Crookes reached a difficult corner to head the ball narrowly past the post. The only real chance Bamber had was just past the hour mark, when they won a free kick after a raised am by Filson following a tackle. The Aspinall's shot dipped just over the cross bar, giving Fish the first real scare of the day.

Celtic wrapped it up in the last ten minutes, to ensure that the goal difference in the table was increased. McNeil was put through by Pickford, and shot low and hard to the keeper's left on the diagnol, into the net. And finally, just before full time, Scott and Jones interchanged the ball around the Bamber Bridge defence, dazzling them into inaction, before Scott repeated McNeil's shot, again beating the keeper.