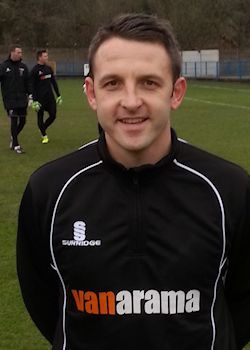 Leeds born Scott started his playing career at the Leeds United Youth Academy, before joining Bradford City at the age of 14. In July 2000, he had progressed far enough to be offered a professional contract with Bradford City. Not long after, for a nominal fee, he joined Hull City, but suffered a back injury, and was forced to sit out his first season with the Tigers. Finally fit, he failed to make an impression and was sent on loan to Frickley Athletic, where he made five appearances and scored once, before being released to join Scarborough in 2003. He was a fans favourite at Scarborough, making eighty-four appearances over a two year stint, before joining Lincoln City in 2005. Almost an ever present member of the squad he racked up two-hundred and twenty-one appearances (scoring eight times) before he eventually joined Conference side York City in 2011. Two seasons at KitKat Crescent with nearly eighty appearances was ended only by an injury. On his return from injury he struggled to get back into the squad and joined Grimsby Town for a season, making nearly forty appearances. In 2014, he joined Bradford Park Avenue, and spent some time on loan at Hyde, before joining Celtic late in 2014 to help them climb the table.
Photographer