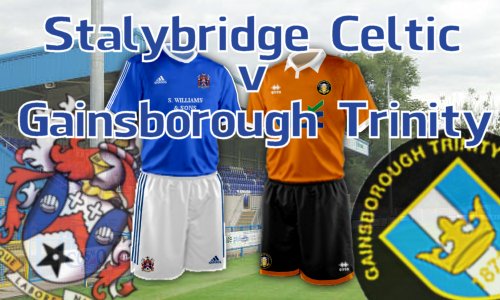 Celtic Survive At The Very Last Minute
By Debbie Taylor 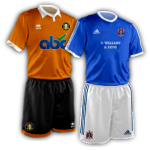 It was cutting it close but Celtic's safety in the Conference North wasn't assured until the final whistle in the final match of the season. With both Colwyn Bay and Brackley winning their respective fixtures, a lost for Celtic would have meant relegation, and Trinity push that to the wire.

Celtic got the best of possible starts against Gainsborough, having the better of the early play, with both Matt Regan and Ben McKenna went close from set pieces, before pressure from corners paid dividends for Celtic, with Ben McKenna's corner was whipped in, Matty Hughes nodded down, and Alex Mudimu stabbed the ball into the back of the net amid the chaos the corner had caused in the visitor's box.

Trinity almost hit back immediate, with former Celtic midfielder Steve Brogan had a good interchange with Trinity's best player, Chris Hamilton, to put him one-on-one with Ross Etheridge, but fingertips pushed Brogan's low drive around the post. Hamilton got the equaliser Trinity's pressure deserved soon after, when he collected a long clearance, got behind Peter Wylie and fired off a low drive that Etheridge did well to get down to, palming it wide of the goal, but Hamilton kept running, collected the loose ball and fired in from a very acute angle to equalise.

And that should have been the score line at half time, but for man-of-the-match, Chris Simm, who wrapped his head around a superb McKenna corner, and planted it in the top corner restoring Celtic's lead right before the interval.

Celtic started the second period the stronger, in control, and looking to extend the lead, Aidan Chippendale's superb drive was tipped around the post with a fine save from Rory Watson, only he didn't get the credit he deserved and it was given as a goal kick. Powell went close, with a one-two in the box with Simm, only for Charlie Binns to stick out a leg and divert the ball away from goal. However, Simm did put the ball in the back of the net moments later when Chippendale's sublime curling cross was met with a firm header, and Celtic had a two goal cushion.

It could have been a three goal cushion, but Binns again got in the way, this time of a McKenna cross that he diverted onto his own crossbar, but the corner couldn't be converted and Trinity countered rapidly, substitute Lyton Karkash getting onto a looping cross from Simon Russell, only to turn it into the side netting when half the ground thought he?d scored.

Trinity got back on level terms with two goals in five minutes. The first came when Mudimu's clearance was sliced and landed at the feet of Paul Beesley, who doesn't need an invitation to shoot, and fired it back in, the ball sailing into the top corner. Brogan was the player to equalise, Hamilton's run along the byline and pull back leaving the former Celt a clear site on goal that he took.

At 3-3, another goal from Trinity would have spelled the end of Celtic's time in the Conference North. However Celtic went looking for another goal, and it was Chippendale who got it, Jamie Allen's run to collect a ball he had no right to reach, and pull back to Chippendale saw Chippendale fire in an unstoppable effort, and restore Celtic's lead.

All Celtic had to do was hold out for 10 minutes, and safety was guaranteed. Three times Celtic went to hold the ball in the corner when attacks were on, but it was too much time to hold on for, and Trinity punished Celtic for it. Hamilton, who?d not read the Great Escape script, again beat the Celtic back line, this time looping a cross for Karkash, who smacked home the equaliser for Trinity.

This left Celtic with three minutes of stoppage time to face a rampaging Trinity looking for a winner, knowing that if Trinity scored it, we were relegated.

With a sub, and some (to be frank) blatant time wasting on throw ins, Celtic limped over the finishing line with the absolute bare minimum of results. It couldn't have been cut any finer, but a standing ovation for Liam Watson, as any kind of survival in the Conference North seemed an unrealistic possibility a month ago.