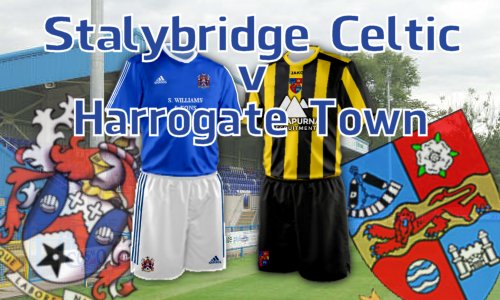 Celtic Get Within A Sniff Of Safety
By Debbie Taylor 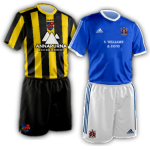 Celtic put their Conference North survival back into their own hands with a wonderful header from Michael Powell, and a cross turned shot from Aidan Chippendale was enough to send Harrogate away empty handed.

Celtic had the better of the first half, with Tom Bentham connecting perhaps a little too well with Chris Simm's lofted cross and blazing over the bar, whilst Stefan Galinski went close with a thumping header from a Michael Potts corner. Even though Celtic were on top, Harrogate seemed to be generally keeping a strong back line until Chippendale raced past Louis Swain and whipped in a superb cross to the back post where Michael Powell came in and under pressure put his header back over Peter Crook and into the back of the net to give Celtic a slender lead. He could have doubled it with a volley again at the back post off a Chippendale cross, but fired well wide and over.

Powell went from hero to villain in less than five minutes when a mistimed tackle just inside the corner of the box from a corner up-ending Jordan Thewliss. Thewliss took the penalty himself, and though Ross Etheridge went the right way, he couldn't quite reach and the ball nestled in the bottom corner. It could have been worse just before half time as Paul Clayton got his head on a left wing cross, only for Etheridge to pull off a super stop at point blank range to keep the scores level at half time.

Celtic got a bit of luck in the second half, as Harrogate upped their game. With Celtic desperately hunting for a winner, several times they were left short-handed at the back, Paul Clayton got one-on-one with Etheridge, but the Celtic keeper again came out on top with that particular contest, pulling off another great stop to deny Clayton. Jordan Thewliss came within a whisker of doubling his tally with a speculative shot from thirty-five yards that wouldn't quite curve enough to come inside the post, and rebounded back off the woodwork and was hacked to safety.

Both Tom Bentham and Chris Simm got into half a yard of space, but couldn't quite connect well enough to force Crook into anything other than a routine save, whilst at the other end Adam Nyoni got into the six yard box, one-on-one but couldn't keep his shot down, blazing embarrassingly over.

Despite all of Harrogate's play in the second half, Celtic got that vital goal. Matt Hughes sent Chippendale scampering down the left wing, he beat his man, and fired in a curling cross to the back post, only there was nobody there to meet it as it sailed over Crook and into the back of the net.

Whether meant or pure luck, they all count and Celtic secured the three points and held onto them to go above Brackley on goal difference and within a point of Leamington, and two of Colwyn Bay with a game in hand over all three sides. If Celtic can do something that they haven't managed in the years of a donkey, and beat Guiseley on Easter Monday, the great escape will well and truly be on.