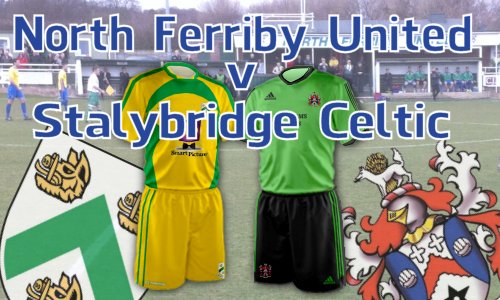 Decisions Not Falling Our Way
By Debbie Taylor 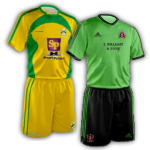 Even when Celtic play well, the decisions just don't seem to be falling our way, with a nailed on penalty waved away, and Ben McKenna through on goal only to be told the ball had gone out for a goal kick, when it touched the line, not crossed it.

Celtic started brightly enough, with Jamie Allen a real handful for the home defence, getting into good positions, and forcing a good piece of goalkeeping from Jonathan Hedge, when the youngster was through one-on-one and he lobbed Hedge at the edge of the box, but the keeper got a fingertip on it to force the ball up and caught. Matt Regan got a thumping head on a corner, but directed straight at Hedge.

North Ferriby were also playing well, and though Tom Denton and Adam Boulder had early shots go wayward, before Boulder tried to poke a ball through but debutant keeper Ross Etheridge stopped easily, but there was nothing the young Derby keeper could do when Danny Clarke raced clear, and pulled the ball back for a completely unmarked Denton stood at the edge of the six yard box. Denton trapped the ball, drew Etheridge and slipped the ball past him.

Celtic kept going, and Regan again forced Hedge into a decent stop with a half volley from outside the box, and Michael Potts fired a corner wide of the mark. Tom Denton came very close, his rocket of a shot from just inside the box had Hedge beaten but Louis Bruce threw himself in the path of it to diver it out for a corner. Ben McKenna tricked his way into the box with some good feet but the final shot lacked the power and Hedge scooped up.

When Bentham did get into a good position, right before the interval, Louis Bruce slid straight through the striker and got nothing of the ball, but left Bentham on the floor. With Bruce getting nothing of the ball, the choice was penalty or goal kick. Instead Celtic got a corner, which Harley Wigley headed wide.

The start of the second half saw Celtic continue where they?d left off, though Bentham looked to be feeling the effects of the penalty shout. McKenna was terrorising Bruce, and got clear space for a great shot that had Hedge at full stretch, and the Ferriby keeper had to hold it, with Allen bearing down on him for the rebound. Scott Kerr fired in from thirty yards, but Hedge was well placed, before at the other end, Danny Clarke raced through showing an alarming amount of pace, but Etheridge pulled of a decent stop, turning the ball round for a corner.

From the corner, the ball dropped into a melee of players at the back post. The ball pinged around, it was impossible to see what was happening, but somehow, the ball was forced over the line. Initially, it looked like it might have come off the back of Etheridge, or Harley Wigley; but eventually the goal was credited to Danny Clarke.

Celtic looked like they might get a goal back when McKenna danced down the by-line past Bruce and was about to pull the trigger at the near post, when he was pulled back for a goal kick with the linesman unsighted by the goal and guessing incorrectly. Harley Wigley was dismissed for a second bookable offence leaving Celtic to play out the game with ten men, and yet he last chance of the match fell to Michael Potts with a half cleared corner that he lashed back in wide of the mark, leaving Celtic now having not scored in the last two matches, and having scored two in the last five. The Bradford game on Saturday now takes on as big an importance as the same fixture in the year of the Great Escape.