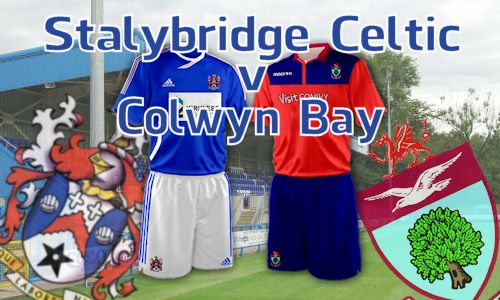 Still a loss, but signs of improvement
By Iain Benson 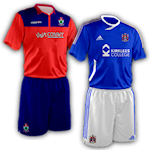 Celtic looked a little shell shocked at the start of the match after the Boxing Day mawling, but James Tunnicliffe put in a man of the match performance across the park to give Celtic a bit of pride against a well drilled Colwyn side that looked massively different from the team Celtic beat earlier in the season.

Craig Ellison looked to have recovered from the nightmare at Altrincham, but there was nothing he could do when two minutes into the game, Sean Williams saw a chink of space and unleashed a thunderbolt from thirty-five yards screaming straight into the top corner.

This added to Celtic's shell-shocked look, and there was some moments of panic at the back, with Mike Lea cutting inside and forcing Craig Ellison into a full stretch save, and he was there again to make Williams's next effort look tame. Then came a rare moment for Celtic: a goal straight from a corner. Callum Warburton's inch perfect corner kick was thumped goalward by James Tunnicliffe and although Chris Sanna got a hand to it, he couldn't keep it out.

Celtic were calmed somewhat by the goal, and began to give as good as they got, but every time the ball was in the Celtic box, there was a lack of cohesion, and this was most evident on the half hour when Celtic just could not get any distance on a clearance from a corner, and it kept coming straight back in, until the inevitable happened and Marc Williams was lethal from four yards.

Celtic were immediately back to trembling mode again, and this time Colwyn Bay capitalised with a clinical finish from Gareth Evans that left Ellison no chance of reaching it, although questions have to be asked of those in front of him allowing Evans the space he needed.

Celtic nearly got one back just before half time when Callum Warburton latched onto a half clearance from his own corner and fired through a crowd, but the deflection took it too Sanna instead of away, and Celtic trailed 3-1 at the interval. The frustration in the Celtic team was obvious, and Kristian Platt was lucky to stay on the pitch when he kicked out at Marc Williams and earned only a yellow.

Confidence surged back through the Celtic team ten minutes into the game when a stupidly reckless, two-footed challenge from Anthony Stephens sliced straight through Sean McConville leaving the Celtic midfielder in agony. With the ball already gone, there was no option but to issue a straight red for Stephens and reduce the visitors to ten men. It was obvious that the whole Celtic squad thought there was a chance to claw back the two goal deficit now.

But, they reckoned without the well drilled Colwyn Bay defence. It was difficult to break down, and when they were beaten, as Phil Marsh did twice in a minute, Chris Sanna was on hand. He denied Lewis Hatch distance effort, and kept the cushion in place as Celtic's attacks washed up on solid rock. Sean McConville's superb effort deserved more but an acrobatic save from Sanna denied him at the expense of a corner that McConville headed narrowly wide.

A goal was coming, and it came from the quicksilver Adam Pepper, working a bit of space and unleashing a powerful rising drive that Sanna grasped for but couldn't reach, but the standard ninety were up.

Celtic were handed a lifeline when the referee punished the relentless Colwyn Bay time wasting by adding six minutes, annoying the manager, Sinclair, who had been the one urging his keeper to slow it down on goal kicks (that earned him a booking), and the rest of his team on every dead ball.

The following six minutes saw an onslaught from Celtic, but breaking through the eight man wall was too big an ask, but with seconds left on the clock, a peach of a cross from Andy McWilliams found the boot of Obi Anorou who thought he?d pulled an unlikely draw out of the bag until Chris Sanna pulled a truly outstanding reaction point-blank save out of the bag, and took all three points for his team.

Celtic will have to do it all again on Wednesday as we face Altrincham in the second of the Festive Fixtures. A return of the confidence from the second half today will go someway to ensure that the Boxing Day Match isn't repeated with a knock-out.