Back down with a bump
By Six Yard Sam 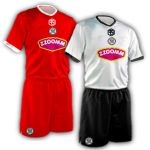 Celtic were simply overrun in the second half by one of this season's title contenders who simply had too much for Celtic.

It started straight away, with Paul McCone latching onto an initial fine save by Aaron Jameson in the Celtic goals, putting away the rebound assuredly. Although Conal Platt's effort had to be saved, it lacked the killer blow to make it hard for Dan Crane to catch, while at the other end it would have been two in ten minutes for the home side if Jamie Tunnicliffe hadn't cleared James Osbourne's effort.

Phil Marsh looked to have been tripped in the box, but a corner was the only result, a corner that Kristian Platt attempted to backheel into the net with a deft flick, with Crane tipping the ball over the bar for a corner that Tunnicliffe headed over.

In the second half, Celtic went looking for an equaliser, and came unstuck with a rapid Hednesford move that saw Osbourne turn provider outpacing the Celtic back line, and pulling the ball back for the league's top scorer, Elliott Durrell to smash home. Celtic needed to get back into the game, and manager Keith Briggs led the line heading down only for Crane to make a smart stop, but Phil Marsh wasn't so easily denied moments later stealing the ball and slotting home in assured fashion to halve the deficit.

Five minutes of great play from the home side put paid to any chance Celtic had of getting back into the match, Nathan Woolfe's cross-cum-shot was parried but picked up by Greg Pearson who restored the two goal lead. And five minutes later, that lead was increased when Woolfe converted a free kick (with a considerably deflection) that left Celtic well and truly high and dry.

It's the sign of  potential champions when with only a few minutes to go, the foot is not taken off the gas, and Hednesford showed this, with Woolfe's free kick only denied by the woodwork, and Elliott Durrell denied by a fine save from Jameson.

Celtic's young lads still have a lot to learn, but they put up a good performance against a superior side.