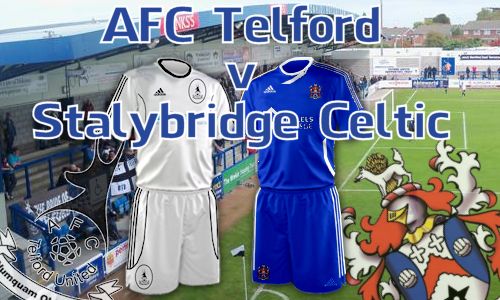 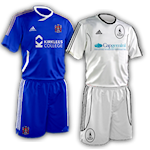 But for an outstanding goalkeeping display from Matty Urwin, Celtic could have been looking at their heaviest defeat in years as Telford turned it on big time.

Straight from the kick off Telford attacked quickly, decisively and in numbers. After a foul by Obi Anorou in the middle of the park, Celtic seemed to stop and let Wes Barnes storm down the field and whip in a great cross that evaded the Celtic defence far too easily, for Adam Farrell to tap in. Farrell nearly made it to when his edge of the box effort was hacked clear by Andy McWilliams, before it was too in an identical move saw Baynes whip in another cross, this time for Sean Clancy to nod home and double the home side's lead.

Straight before Neil Byrne headed into the arms of Urwin, a moment of madness saw Sean McConville foul Byrne and then get involved in a tete-a-tete with Simon Grand. McConville got a yellow for the foul, and a yellow for the afters, and was dismissed. Telford had been running rampant before the sending off, afterwards, they went into hyperdrive, slicing through the Celtic team at will, and producing the very best out of Matty Urwin.

Urwin got down superbly at close range to deny Sean Clancy, produced a stunning stop one-on-one with Tony Gray, then again from Gray with a low shot that Urwin punched away, and then produced his best save of the half lifting Farrell's close range header over the bar with an acrobatic save. Minutes later, and Robbie Booth steamed in with an absolute rocket and Urwin was again flying across his goals to deny Booth.

The second half continued in the same vein, Telford attacking quickly and in overwhelming numbers, Celtic had spells looking like their usual selves, but were soon swamped again. Sean Clancy found Urwin's legs in the way again at close range, and when Tony Gray finally beat Urwin after Urwin had already half blocked his route, Mark Lees was under the bar to head away. If it wasn't Lees on the line, it was Kelvin Bleau, hacking away Charlie Barnett's lofted ball to the back post.

Not even the scuffs were going in for Telford, Farrell's half scuffed attempt at a back heeled shot was caught as Urwin pounced on it, Matty McGinn seeing a great superman impression from Urwin as he flew to the top corner to palm away the pile driver from the full back, and getting back into position ready to make Farrell's scissor kick look like a simple save. Matty Urwin's good work was undone by another moment as defensive madness saw Urwin save Clancy's close range effort with his legs, only for Joel Bembo-Leta's clearance to go to the back post, where Tony Gray was on hand to tap home.

Urwin had a bit of a rest for five minutes as neither Sean Cooke or Tony Gray significantly tested him with their efforts, though it was a top draw save in the top corner to deny Wes Baynes.

Whether Telford ran out of energy or switched off at 3-0 up with five minutes to go Celtic suddenly looked in the game, pressing Telford back into their own box and finishing really strongly. Substitute Paul Ennis furnished Celtic with their first shot on target with a mere four minutes left on the clock. Moments later and another substitute, Tom Buckley (on for the injured Kelvin Bleau) fired in a great cross for fellow sub, Phil Marsh, who was beaten to knocking home by Mike Grogan, who hung his head in shame, but in truth, there was little he could have done.

To cap off his great performance, and keep the score line reasonable looking, Matty Urwin flew one last time across his goal to push Sean Cooke's late effort past the post, and there was insufficient time for Telford to make anything happen from the corner.

Celtic could have been on the end of a drubbing against a team for whom everything fell into place but thanks to Matty Urwin, they weren't.