It just keeps getting worse
By Debbie Taylor 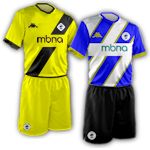 There was little in the way of encouragement in this match. Celtic appear to have lost the plot over recent games, going from a side that could sweep any side before them (such as Boston, Nuneaton, Gravesend) to one that couldn't sweep the garage.

Chester's tactics were simple and effective. They kept Ayorinde boxed in, and put lots of balls over the defence in the hope that Tate, Beesley or McElhatton could run onto them.

Celtic's tactics could not have been more different. Ayorinde was put up the front by himself, to try and get onto balls lobbed towards him, which is a tactic that just will not work. With this being a must win match, perhaps three forwards would have been the better option, but a standard 4-4-2 with Courtney being between the midfield and Ayorinde was the order of the day. It seemed as though the team did not like this positioning, and the shape kept falling apart.

Celtic started the game by lobbing a ball up to Ayorinde, who's sheer presence won a corner, but when the corner ball eventually fell to Parr just outside the area, his rasping drive was just wide.

Then Chester got involved, with Walker's poor kick out being caught by Carery, who lobbed a ball over the defence. Beesley, Woods and co were static, expecting the offside flag to be raised for Beesley who had been well offside, but he raised his hands and continued trotting back on side. Not so Tate, who saw his opportunity and ran through the defence. Walker saw the problem and reacted quickly, narrowing the angle. Tate's shot was wide, and Celtic used up their Get out of Jail Free card.

On several occasions, Beesley ran onto lobbed balls, and when he wasn't caught offside, he got into some dangerous positions, with Perkins had to be alert to prevent his crosses reaching the box. On the other side, Murphy allowed Woodyatt to get past him and whip in a dangerous ball that neither Walker or Tate could reach, allowing Peacock to clear before Beesley could pounce. After a couple of attempts, the ball fell to Rose, who struck the ball well, but it sailed over the bar.

Beesley was unaware of the power and speed of Tate, as was demonstrated when his back pass was no where near strong enough to reach Walker, and Tate almost took advantage, but Walker tackled well, clearing for a throw. Celtic appeared to be defending well enough to keep Chester at bay, with even Parr getting in on the act, denying Beesley at the expense of a corner, by heading over his own bar. Murphy then denied McElhatton, but only just. It was real seat of the pants stuff.

Celtic finally got the ball down the other end, when Courtney ran through several defenders, but saw his way blocked ever more yellow shirts, he held the ball up well, and laid off to Parr, but Parr's shot, though well struck, went wide.

But Beesley still hadn't got the measure of Tate, and again allowed him to get onto a poor back pass. It took a great save from Walker to deny Tate when he was one-on-one with Walker.

Possibly Celtic's best effort on goal came from Woods. Ayorinde was bustled just a little too hard by Brabin, and won Celtic a free kick just inside the Chester half. The referee twice pulled the quickly taken free kick back because he wasn't ready. When he finally indicated he was ready, Woods instead of passing it off to Murphy as he had twice, had a shot. Brown was at the edge of his area, and ad to run back to the goal line. Fortunately for the Chester number 1, it went just over, as he was no way near enough to save it.

Celtic's stalwart defending continued throughout the opening half an hour, as Chester peppered the Celtic box with cross after cross. At times, Celtic struggled to clear it further than a yellow shirt. Woods backheeled a ball clear, ahead of Beesley sneaking on goal, then Parr, Woods, Pickford and Celtic's Beesley all blocked the shots of Chester players in a short space of time.

Pickford did have a shot, after a corner won by Ayorinde's persistence, but Bolland blocked it with his face, and had to receive treatment. And Courtney ran the full length of the field before dropping the ball off to Peacock who's first time ball in was met by Ayorinde and Brown at the same time - with Brown being the victor, punching it off the Nigerian's head. This move proved so successful that after weathering a Chester free kick just outside the box, which Brabin headed over the bar, Courtney dropped the ball off again to Peacock, but Brabin was there to head clear. Chester also managed to clear a Celtic corner, and Brown claimed at the feet of Ayorinde during Celtic's best 5 minute spell just after half an hour.

However, Chester looked the more likely of the two teams to score. The signs were there, especially the acrobatics of Tate, when Beesley's nodded ball over the defence was met by Tate's stretching boot, he only just sent it over the bar - Chester did look dangerous. The goal came when Pickford gave the ball away needlessly in the Chester third, a long ball was brought down well by Tate, who slid it into the path of Beesley. This time Beesley beat the offside trap and from a tight angle blasted it over Walker's outstretched hand.

Chester finished the half the strongest, and either Beesley or Tate should have done better when Tate slid another excellent ball for Beesley to run onto, leaving his Celtic namesake standing, Walker read the danger, blocking the shot well, but it fell to Tate. As Paul Beesley recovered, Tate didn't have time to control the ball, and tried to score with his knee - putting it around the post.

Celtic were relieved for the half to end. with them only 1 goal down.

Celtic must have had a roasting at half time, and came out with a bit more desire. Within the first minute, they patiently built up from the back, and Peacock eventually found the head of Courtney just inside the box, but his header, though on target was too weak to worry a keeper of Brown's quality.

Chester almost proved their own downfall moments later, as Brown's ability was allowed to shine. Peacock whipped a ball in for Courtney to latch onto. Rose had to do something, and so did a diving header - which was always going to be a goal, until Brown leapt across the width of his goals, palming it around the post. The resulting corner fell to Woods, who struck the ball well, knocking over Rose in the process. The rebound fell to Pickford, but there were too many bodies in the way, and the ball went wide.

Peacock then had a go himself, getting into his favoured position, and the curling shot required a good save from Brown, tipping the ball over the bar. Parr headed the corner wide.

A clearance from the Chester half saw Celtic short at the back. Perkins was left with two attackers running at him, he chose the one with the ball, and almost intercepted it as Beesley slipped it to Woodyatt. Woodyatt then had a free run on the Celtic goal. At the last minute he crossed to Tate who slammed shut Celtic's revival by nodding it past the helpless Walker.

Within moments, insult was added to injury as McElhatton had nowhere to go on the wing, so curled a hopeful 40 yard shot from the right wing, off the far post, and past the unsighted Walker.

Chester continued to look for the fourth, and Walker had to be at full stretch to tip McGorry's speculative shot out for a corner. Beesley turned around Perkins to get a shot off, and Walker gave them a second corner with an excellent save. It was a poor corner, which Pickford could cut out easily for another corner. Perkins eventually cleared the ball up field. 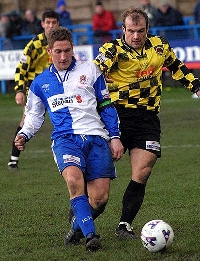 Celtic half heartedly tried to get something from the game, if only for pride. Peacock's ball in was only half cleared as far as Pickford, who lifted it over the defence for Ayorinde to run onto. Brown was quick, smothering at Ayorinde's feet. Despite being brought down by Brabin, Ayorinde still managed to get the ball through to Courtney, but his shot was far too weak to trouble Brown.

Celtic switched to a 4-3-3 formation after the hour mark, with Mike replacing Wood. Mike's first job was to head a Peacock cross over the bar.

Celtic's more attacking formation looked like the one they should have started with as they began to gain more of the upper hand.

Brabin acrobatically cleared Peacock's cross in as far as Perkins, who put it back in for Ayorinde, but the Nigerian, put around the post.

Chester tried to put a stop to Celtic's renewed resurgence by grabbing a fourth goal, but Beesley's driving run through the heart of the defence was eventually tipped around the post by Walker, and he then punched clear the corner ball in, but only as far as Woodyatt, who squared to Brabin, who let the side down by sending the bar sailing over the bar.

Ayorinde ran the ball into the box, and had a ferocious shot which Brown did well to parry away. It looked like it would go for a corner, but Mike kept it in, whipping it back towards Pickford. Pickford's inch perfect cross was headed well by Ayorinde, and again Brown did remarkably well, catching and holding the ball.

There was a bit of a scrum after Ayorinde shrugged off the attentions of Bolland in the box, and Bolland went after him for some afters swinging a punch at the Celtic front man. The referee saw it all, and the fact that Ayorinde's raised arms in this instance were for defensive purposes only. Bolland was lucky to stay on the pitch with only a yellow card.

Celtic again lost impetus after this scuffle, and couldn't really continue their revival. The cap was eventually put on the game when Brown received a back pass from Bolland and just stood there. No Celtic player looked like making him do anything for a good thirty seconds as Brown waited patiently for the five added minutes to be used u. Eventually, Ayorinde made a move towards Brown, who then picked up ball, and booted it down field. McElhatton got on the end of it, ran into the box, and slotted it past Walker.

Even Turley (on for Courtney) couldn't get any pride out of the occasion for Celtic, when an Adie Mike won corner eventually fell to him, and he put the ball over the bar for the last kick of the game.

This was another lack-lustre performance from a team that is capable of producing the goods. The nationally recognised victory over Boston proved that. Celtic now have 11 games left, three of which are against the three teams below us. We need wins out of all three of those games now. Starting with Scarborough on Tuesday.