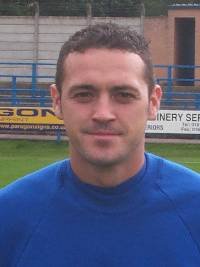 Matthew started his career as an Everton trainee before being taken on at Chester in 1996 where he made over 150 appearances for them. He is an able defender. He was born in Gosport in June 1976. He left the club after we were demoted into the Unibond, only to return a year later to stiffen the back line, and then leave again, to rejoin Rossendale United after barely 3 months back in the Blue and White, before joining Colne in 2003. Since then, he has been on a non-league tour, taking in Chorley, Darwin and Nelson, before the now 33 year old defender joined Ramsbottom United at the start of 2009
Photographer