Celtic are safe
By Iain Benson 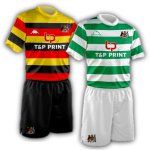 It was by no means a classic game, on an awkwardly bouncing pitch in heavy wind, but Celtic came from behind and got the draw that meant safety for next season.

The opening chances fell Celtic's way, Joel Bembo-Leta firing into the side netting from a corner, and Jack Ryan bringing a great save out of John Lamb when he was put through one-on-one, hut Lamb made himself big to deny Ryan on the edge of the box. At the other end, Chib Chalaka missed by the narrowest of margins firing across Danny East's goal, and Martin Drury brought a good save out of East. Paul Walker fired just wide, and despite the pitch preventing good football, Bradford looked the more likely scorers, and that proved the case.

An uncleared corner was put to the back post, Ryan Qualter headed it back to the mix, Chib Chalaka had his back to goal, and Joel, and hooked the ball over his shoulder, and with more luck than judgement the ball flew into the net and gave the home side a probably deserved lead.

Bradford could have added to that score-line, but East stopped Chilaka doubling his personal tally with a flying save and Martin Drury should have done better with his header, keeping Celtic still in touching distance at half time.

The second half saw Celtic playing into the wind. Again, the opening chances were falling Celtic's way, Jack Ryan's header was a comfortable catch for Lamb, and at the other end, Grant Black's cross turned into an awkward save from Danny East.

Celtic looked to be running out of ideas when Bradford won a corner. Matt Regan's clearance was inch perfect to send Paul Ennis on a scampering run, he jinked past Martin Drury and fired in a cross for substitute Josh Green, who volleyed past Lamb with a very well taken goal, while Bradford were still coming back from the corner.

Celtic seemed to feel that it was job done, and played down the clock, and Bradford seemed content to let them, thus at the final whistle when news broke that Histon had lost and were relegated alongside Workington, there were joyous scenes from players and supporters alike.