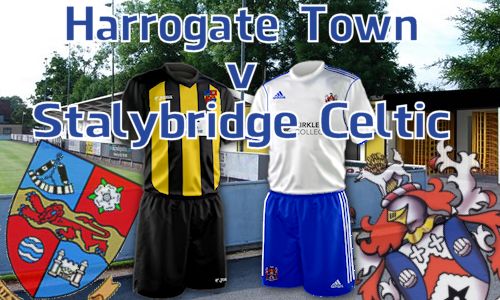 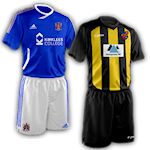 Celtic will feel most aggrieved by two of the decisions today which may have cost three points, never mind two, but will have to take heart in that the performance was much improved and made high flying Harrogate look ordinary.

For the best part of the first half hour, very little happened in the match, with a couple of efforts by Sean McConville the only thing of note, but neither looked likely to result in a goal, missing and trundling into Craig McGillivray's arms. Then the game came to life. Paul Ennis looked like a terrier amid the Great Danes of Harrogate's back line and his inch perfect ball into the path of Sean McConville allowed McConville to smash the ball home with former Celtic keeper and Colnference North player of the month, McGillivray, helpless to get to the powerful close range shot.

It needed a tight few minutes by Celtic, but Steve Mallory's ball over the top was met by Chris Hall and debutant keeper number seven for Celtic, Danny East, was left picking the ball out of the back of the net as his first job in the match.

After Paul Ennis had blazed wide when through on goal controversy rocked Celtic, when Buckley's powerful shot from the edge of the box was parried by McGillivray into the path of Ennis who smashed it back into the top corner, only for the offside flag to go up for Obi Anorou who was in an offside position, but was in no way interfering with play! It was a diabolical decision, and a harsher ref would have booked Keith Briggs for remonstrating with him. But it seemed the ref realised his (and the assistant's) mistake and allowed the Gaffer to vent.

Celtic started the second half looking less of the threat that they were in the first, and Harrogate capitalised with their second shot of the game a free header for Adam Nowakowski at the back post to nod home from close range from a corner, another in a long line of such goals against.

More controversy followed, when Sean McConville was clearly taken down in the box after knocking the ball past Matt Heath only to get tangled in Heath's legs, but there was a waving of the arms from the man in black, and once again, Celtic were frustrated. That decision seemed to knock the stuffing out of the Celts, and despite a lot of running, there was very little in the way of attacking football, and as Harrogate had attacked very little all game anyway, the remainder of the half was a no-show.