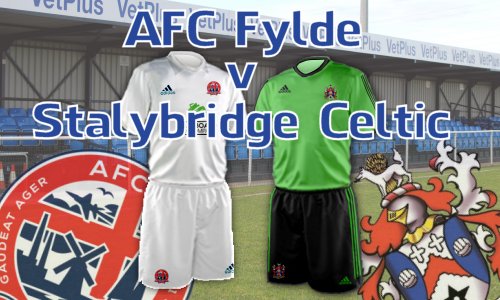 Tired Legs Give A Halloween Nightmare
By Debbie Taylor 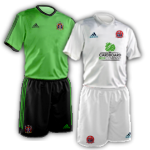 After Wednesday night's late, late finish, Celtic can be forgiven for losing at the current league leaders, and possible champions; even so, they did not deserve to lose by as much as they did, 5-3 may have been a fairer reflection, but for the charmed life the Fylde goal had.

Fylde are a superb breakaway team, who absorbed pressure then attacked at speed with numbers, overwhelming the Celtic defence, although in most cases the Celtic back line did enough. Dion Charles, shadowed by Oliver Crowley, still managed to get enough space to fire off an early warning shot, but Tony McMillan got down well and saved at the second attempt.

It was during a counter attack that Fylde got their first, Josh Wilson racing away and pulling the ball back for Matt Hughes to sweep home into an empty net.

Celtic came straight back at the hosts, a lovely lifted cross from Ben McKenna found Aidan Chippendale ghosting in at the back post, but his flicked header towards the top corner went into the side netting. Dale Wright's free kick clipped the wall and went for a corner that caused Fylde untold problems, with it only half cleared as far as Ben McKenna whose wicked shot whistled past the post with Ben Hinchcliffe a statue.

Another corner for Celtic as some last ditch defending prevented Dale Wright grabbing an equaliser, and again the corner caused the hosts monstrous problems, Matty Hughes almost emulating his namesake at the other end, when he latched onto the corner but his shot hit the woodwork, bounding back out to Chris Simm whose close range effort was blocked and put out for another corner, which this time Simm fired over the bar.

After Oliver Crowley had bested Dion Charles blocking one effort, moments later, and Charles won the second bout, out pacing and out muscling Crowley to get the space to fire across McMillan and into the far corner of the goal.

Celtic kept the pressure on though, and it was Jack Higgins's turn to hit the woodwork just before the interval. At the interval 2-0 definitely flattered the hosts.

The second half was a different story. Fylde were content to soak up the pressure, and break at speed. Adam Farrell really should have scored when Aidan Chippendale skipped past Casper Hughes and pulled the ball back for Farrell, who had time and space to pick his spot and picked a spot a yard wide of the goal. Celtic were made to pay almost immediately when Fylde broke, Matt Blinkhorn nodding the ball into the path of Danny Rowe who, one-on-one with McMillan, produced a delicate chip over the Celtic keeper to put Fylde three up.

After substitute Amour Lingouba fashioned a wicked shot that Hinchcliffe did well to get to, Josh Wilson's thirty yard thunderbolt had to be pushed around the post at full stretch by McMillan, and after Hinchcliffe required to goes at stopping McKenna's fierce effort, the ball was again taken down the other end, this time substitute Danny Lloyd providing the cross, and the Celtic defence still getting back, but not in time for Danny Rowe to get his second with a free header at the back post.

Hinchcliffe fashioned a superb save from Chris Simm after good build up play caused calamity at the back for Fylde, culminating with Simm's shot and Hinchcliffe's reaction block near the post, and then moments later Rowe feeding through for Lloyd this time, allowing the substitute to pick his spot and put a gloss on a performance that could have finished much closer, but didn't.

Celtic performed well, but Fylde performed like champions, taking their luck and chances in equal measure.