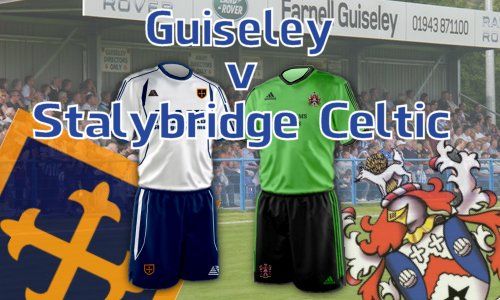 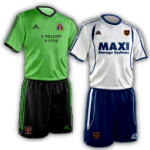 Celtic moved out of the bottom three and recorded their first ever victory at Nethmoor and their first clean sheet since January with an emphatic win over Guiseley. Not a stuffy win but a deserved win, with two well taken goals, and but for the woodwork and Steven Drench, it could have been a whitewash.

Chris Simm was immense throughout the game, running himself into the ground for the cause, and he got the first chance of the game for Celtic, holding off the defensive attentions to fire in, but Drench was up to it, and Michael Powell should have done better, connecting on the volley with a loose ball and sending it clear over the bar.

A Celtic goal looked likely, and Simm was the maker, freeing Aidan Chippendale to run between defenders. A beautiful little dink over Danny Hall's foot and Chippendale was one-on-one with Drench. The Guiseley keeper stayed up and made it difficult, but Chippendale passed the ball by him into the net.

Guiseley came back quickly, and Ross Etheridge pulled off a great stop to deny Jake Lawlor at the expense of a corner that Ryan Toulson headed over the bar. Oli Johnson tricked his way up the pitch, but his final shot lacked will power before the first of Guiseley's let offs. Ben McKenna attacked, cutting in from the wing, he could have taken the near post shot, but Chris Simm was far better placed for a simple tap-in, and McKenna found him with an inch perfect low ball. Almost on the line, Simm smashed at the ball, and was horrified to see it rebound off the crossbar and both he and McKenna were so shocked, Guiseley were able to clear. The second let off came moments later after Simm was through, one-on-one with Drench, only for Danny Hall to bring Simm down from behind just outside the box. Hall saw red, and Michael Potts free kick smacked against the post. Three minutes later and it was Ben McKenna's turn to hit the post with a well-crafted move that ended with McKenna's header off Chippendale's cross cannoning back of the post just before half time.

Celtic needed to kill the game off early in the second half, and they did. Guiseley were pinned back inside their own box, as Celtic tried to prise an opening. Simm saw Alex Mudimu completely unmarked at the edge of the box, fed the ball out to him and Mudimu hit is first time and cleanly sending the ball into the top corner.

Guiseley were looking desperate, moved second half sub, Liam Dickinson, up front, brought Gavin Rothery on, and went looking for a comeback, but though Oli Johnson's pace and technical ability got him into position several times, his shooting was wayward. At the other end, Chippendale's cracking shot was brilliantly parried away by Drench, but that was nothing compared to Oliver Crowley's first touch of the ball after coming on as a substitute was to latch onto McKenna's well weighted lay off, and Drench pulled off the save of the match to keep the score-line at least reasonable.

Celtic move out of the bottom three, still with a game in hand on the teams around us, and will next face play-off hopefuls, Boston United on the back of four unbeaten and three wins in four.