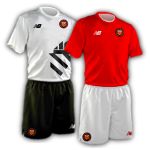 Celtic bow out of the FA Cup, in front of nearly two thousand people, with FC United of Manchester going on to face Northwich in the next round.

Celtic started brightly enough; with Keith Briggs getting hold of Dave Hankin's low pass, but Sam Ashton was up to the challenge, collecting comfortably. Ashton was more severely tested when Joe O'Neill broke the offside trap and fired in a rocket of a shot that Ashton could only parry, the ball coming out to Matty Barlow, with his shot towards an empty net charged down by Adam Tong for a corner. Briggs got his head on the corner, after it was half cleared and played back in by Steve Woods, but again Ashton was well placed to make the save.

After a foul, Carlos Roca played the ball into the box, with Tong's header looping over Paul Phillips, for John Hardiker to hack away at the back post, as FC United built their own pressure. A foul by Graeme Law rashly bringing down Roca led to the former Celtic winger whipping in the ball with Steve Woods heading out. The ball fell nicely for Jerome Wright and he fired in a match winning shot that Paul Phillips could only watch fly into his top corner.

It was always going to be hard to come back after going a goal down, as the visitors harried and hustled Celtic all over the park all the way to the half time interval.

Paul Ennis and Craig Hobson were brought on at half time for Connor Jennings and Matty Barlow, in an effort to turn the game Celtic's way. Hobson was immediately involved, clashing with Adam Carden, and earning a booking. The free kick was launched up field, and Roca forced Phillips into a good save low to his right. Moments later, and Roca was jinking through the Celtic defence again, with Phillips coming out to smother the ball at his feet.

Dave Hankin won a corner out of Simon Garner, which he floated in himself, Keith Briggs getting his head on the ball, and smacking it against the crossbar, with Ashton beaten. Hobson got one-on-one, his blasted effort was on target, but Ashton got down well, blocking superbly, whilst Briggs held off Tong's attention for long enough to try and toe-poke a shot past Ashton as Celtic started to run out of time, but it lacked the power to beat the United keeper. Hardiker came up for a free kick which Law floated into the box, and it was Hardiker who got his head on it, Ashton athletically tipping the ball over his bar for a corner.

Celtic pressed and United played for time, leaving Celtic more and more frustrated. With stoppage time starting, Michael Carr's thunderous shot from the edge of the box was superbly stopped by Ashton, and Briggs went narrowly wide from a corner, after Hankin's cross in was headed narrowly over his own bar by Nugent, with Paul Phillips heading back Hankin's corner to the Celtic captain.

Though Celtic pressed at the end, it was too late for them to change the game, and FC United's tactics, effort and application won them the game.