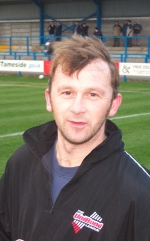 Experienced defender, Lee, started out as a trainee at Hartlepool before joining Stockport in 1990. He went on to make over 300 appearances over seven years for the Hatters before joining Southampton in a deal woth ?850,000. In his year with the Saints, he made less than a dozen appearances and Bradford paid quarter of a million for him. Almost immediately, he was sent out on loan to Walsall, before being released to join Rochdale. He made over 50 appearances in three years before serious injury sidelined him from the professional game; when the collapse of TV monies meant the league clubs were cutting back on staff, he joined Mossley at the start of the 03/04 season, before coming down the hill to Celtic. With the return to fitness of Caldecott and Fitzgerald, Lee was released.
Photographer