Beaten by the ref
By Debbie Taylor 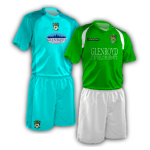 Celtic came into the game fielding 12 fit players, on the bench were the injured Terry Bowker, and Ian Senior, reserve keeper. Whenever Ian Senior's name appears on the team sheet, it is a sure sign that Celtic are in trouble. Never the less, Celtic did enough in this game to win it - but unlike in previous games where this was the case, at least they came out of it with a draw.

Eastwood is slowly regaining his former deftness of touch, and this was evident during the opening period. Almost from the off he trapped a ball from Clegg at the edge of the area and turned in a confined space and unleashed a shot that last season would have made the net bulge, but this season barely made the keeper move. Never the less his tireless running and precision passing showed definite signs that his confidence is returning.

His strike partner during Mayers' suspension was Andy Heald, another player who put in 90 minutes of running, and a great deal of determination. During the opening spell of Celtic dominance, Heald lost the ball and won it back on the edge of the area showing a great deal of determination under considerable pressure. After extricating the ball from a defender he powered a thunderous shot from the edge of the box that had Newnes in the visitor's nets completely beaten, a deflection from an unwitting Burscough defender diverted the ball just enough to thump the post rather than the back of the net, proving Celtic's unlucky streak is still in full swing.

The biggest player in the battle was not in green, nor in blue. He was in black. A looping clearance up field struck Fitzgerald's shoulder. To the amazement of everybody, including the extremely close linesman, who had indicated no such thing, the referee said handball. This wasn't the first incorrect decision, and it would be by no means the last.

As is often the case when a team gets gifted a set-piece they didn't earn, they convert it to a goal, and Crowder's free kick was a stinging curved shot. Ian Bowling, on loan from Worksop during Dootson's injury got a hand to the ball, but failed from preventing it crossing the line. The common consensus was that he should really have saved it, but he hadn't and now Celtic's backs were up against the wall. Five home defeats on the trot must have entered everybody's heads, which drooped. The game degenerated for twenty minutes with the referee seemingly only inflaming matters. During this period he developed an intense dislike for Ross Clegg, penalising him for every tackle, and when Clegg was fouled, the referee gave the free kick to Burscough! In the only consistency the referee showed, he did the same thing moments later. How Clegg kept his cool I don't know.

Eastwood decided to raise the stakes, and when a bad back header put him through, on side, it took some very brave keeping from Newnes to deny the Hit-man a goal to end his drought. Eastwood then tried to pick Heald out with a pinpoint cross, but Bowen got enough of a head on it to divert the ball for a corner. The corner came all the way across for Fitzgerald, who's lob back into the danger area was cleared by Bluck.

Burscough were being limited in their chances by some excellent defending by Keeling, German and Todd, with Fitzgerald sweeping up behind. However when German and Keeling both slid in to deny McHale a chance, they pushed the ball out instead to Brown at the edge of the area, setting him up nicely, but instead of burying the ball he skied it.

In the second half Celtic upped the tempo still further. Fitzgerald had moved to the left flank as Celtic switched to 3-5-2, and one of his crosses supplied Eastwood with an early chance that he headed just over the bar. Newness then at full stretch turned a pile driver from Heald over the bar. Celtic were getting closer and closer. Heald scrambled a ball to Wharton that he put just wide of the mark, and Thornley won a corner.

From the corner the ball came over the top to Fitzgerald, he crossed it straight back to Eastwood to nod past the keeper.

Celtic pounded Burscough, but struggled to clear the last man to get a decent chance. Heald and Wharton both were presented half chances, but could not convert, whilst Clegg was a dynamo in the middle of the park, despite the attentions of the Burscough and the referee. It was Clegg who pushed the ball through for Eastwood to run onto putting Eastwood one-on-one, onside against an inexperienced keeper.

Eastwood didn't hesitate as Newnes raced out, he poked the ball just beyond Newnes as the keeper went down to smother the ball, and would have reached it had Newnes not clipped Eastwood's foot. Eastwood was sent sprawling forward, and the linesman didn't hesitate in sticking his flag across his chest - he'd seen the contact.

Mr. Cummings of Runcorn should have pointed to the spot after sending Newnes off.

There could be no question that it was a penalty - even Newnes was preparing his defence.

The only person on the pitch who was not surprised was the referee. He gave Eastwood a yellow card for diving.

For that decision alone, Mr. Cummings of Runcorn should never be allowed to referee again. At any level. He did not consult with his linesman who had been level with the incident, he made the decision from behind Eastwood where he could not see what happened in front of Eastwood. The sound of contact was clear (I was stood right in front of the whole incident about 8 yards away). There can be no doubt that the course that the rest of the game ran would have been different had the referee made the right decision and sent Newnes off.

The decision got Celtic's ire up, and for the last ten minutes Burscough had a back to the wall defending job to do. Eastwood looked desperate to get the goal he'd been denied. He and Heald were still running at speed, with the latter going agonizingly close with a first time shot from Wharton's pass.

Finally, with only a minute left, the referee owned up to his responsibility. For the previous 90 minutes he had ignored every foul on Clegg under the guise of 'advantage' even when no advantage was to be had. Within seconds remaining on the clock, Underwood slid in on Clegg from behind, the referee should have awarded a yellow card, but Clegg was finally fed up with not getting any justice from the official said something to Underwood who took a swing at Clegg. The referee had to send Underwood off for that, and he did. But only after prompting from his assistant.

I have watched a lot of games - and I know that I am biased towards Celtic, but had this happened in a Premiership match Mr. Cummings would never get to referee again for as long as he lived. It appeared blatant. He didn't want to award a penalty and send Newnes off - so he had to book Eastwood - but even he cannot look in a mirror and say that Newnes did not touch Eastwood. Celtic's luck has already been terrible enough this year without the officials getting in on the act.

If anybody believes that my report is too strong concerning Mr. Cummings , then please ask him why he did not consult with his assistant over a crucial turning point in the game, nobody can be that sure that a second opinion would have gone amiss.