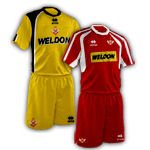 Celtic's improvement continued against high-flying Kettering. The inclusion of debutant Foster from Lincoln City shored up the defence such that the only goal that Kettering scored, came off a Celtic head.

With so much emphasis on the defence, it was like the attack had forgotten that they were required too! That said, the first shot on target came from Winn when he found some space outside the box, but he didn't get the connection to trouble Osborn in the Kettering nets. The same was not the case when Brodie and Ellington interchanged, Brodie pushing the ball out to Ellington who beat his markers and slid the ball into the box past a static Kettering defence for Brodie to latch onto it and slide the ball under Osborn. It was an unusual feeling, being in the lead.

Brodie could have doubled it when Black's deep cross saw Brodie make an excellent run and diving header at the near post that produced a good save from Osborn. Brodie tried setting up Prince who cut inside to make some space on the half hour, but his curling dipping shot was over. When McIlwain brought down Ellington on the edge of the box, Celtic tried a worked free kick, putting the ball out to Prince who smacked it goal-bound, only for enough of a contact from Graham's boot to lift it over the bar, for a corner Celtic couldn't convert.

Celtic's only real wobbly moment came just before half time and Kettering converted it. Okai's run down the wing was too hot for Black to handle, and he whipped in a fine near post header. Debutant Foster got his head to the ball to lift it past Pettinger and into the back of his own net, but in truth, if Foster hadn't, Solkhon was right behind him to do the exact same thing.

Celtic could have restored their lead after McIlwain fouled Winn on the edge of the box; Ellington took the free kick directly this time, curling it over the wall and forcing Osborn into a cracking full-stretch save. From the corner, the ball fell to Prince just outside the box, he threaded the ball through the crowd to Ellington, he was onside and free in the six yard box, you would have bet your house on him burying it, but Osborn did enough to force him to shoot wide across the face.

The second half started with Celtic sitting very deep and trying to hit Kettering on the break. Prince did just that whipping a fine ball across the face. Foster still up from an earlier free kick just couldn't quite repeat his feet in his own net to score a memorable debutant goal. With both defences playing well, chances were few and far between and it was just past the hour when Black finally got a ball into the box for Ellington to slide in on, but Osborn did very well to smother the ball. Black did it again putting in a really good cross that left the Kettering defence twisting, but Graham reacted quickest as Ellington came in for the header, it was Graham who got his head on the ball, narrowly missing scoring an own goal.

Kettering broke from the corner, with Celtic light at the back Howe went on a full field run evading Foster and Keeling to go one-on-one, and forcing a great save with the foot from Pettinger.

It wouldn't be a Celtic match without a bit of controversy, and it came right at the end of the match. From a corner, Osborn had cleared at the expense of a twisted ankle, the ball came out to Winn, Graham slid to dispossess him on the edge of the box, but Winn had already laid off to Sykes. Sykes struck a sweet shot, and with the keeper on the floor, Graham reached out a hand and deflected the ball around the post for a corner. It should have been a penalty, and it wound Celtic up. There was a chance to cool down as Osborn was stretchered off, but some of the Celtic players didn't take it. With the cleared corner back in Pettinger's hands Black vented his anger at the referee who responded in the only way that he could, and sent Black off. Kettering couldn't convert the resulting indirect free kick, and the game goes to a replay.